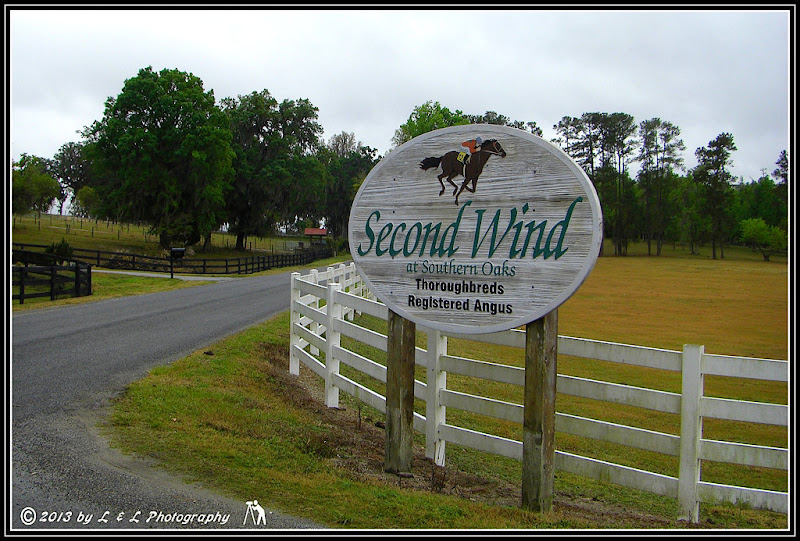 Another beautiful horse farm in the city of Ocala.
Posted by Lowell at 3:50 PM 18 comments:

A country lane in the midst of the city 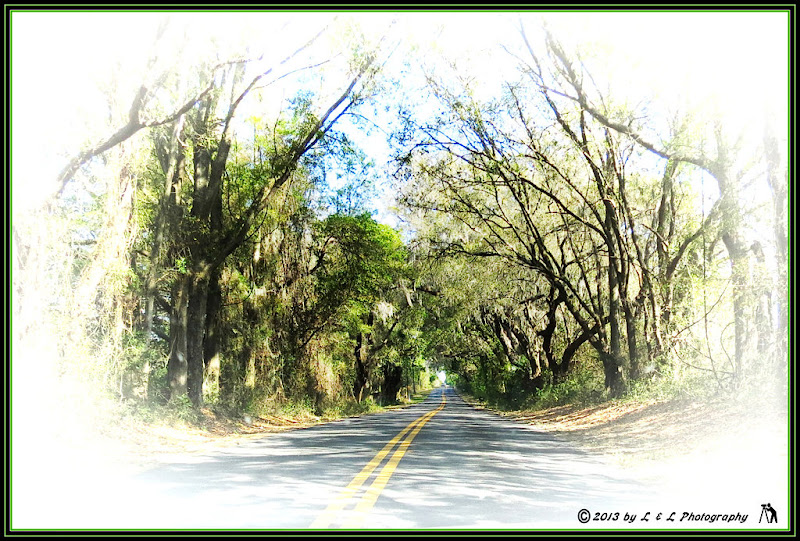 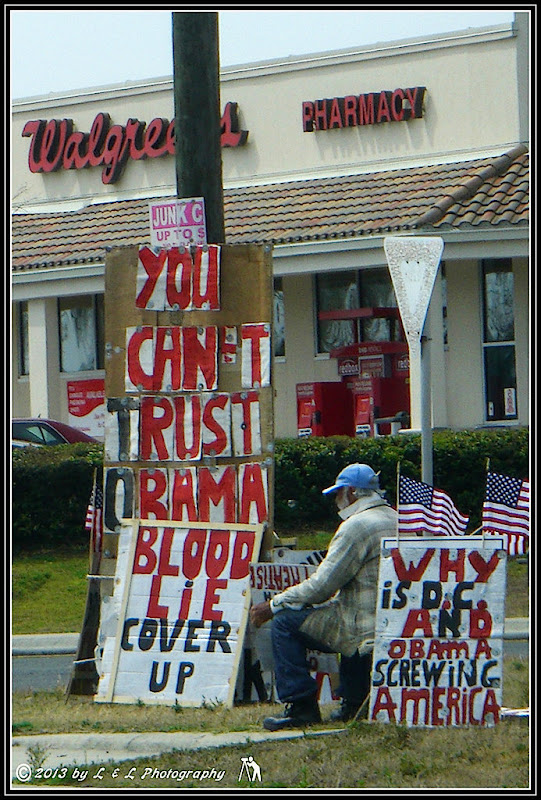 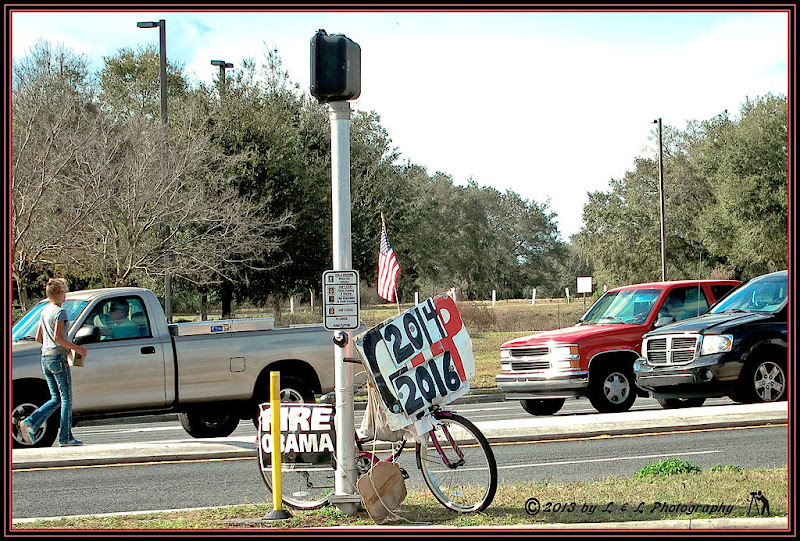 This old guy has been promoting his hatred of our president for the past several years on this particular corner with a variety of signs. Most people pay him no mind. I have not seen him recently, however, and that may be due to the fact the Ocala City Council passed an ordinance forbidding begging at certain intersections based upon the belief that these people are a distraction and a danger to motorists. It appears our resident kook has disappeared along with the beggars.
Posted by Lowell at 10:09 PM 18 comments: 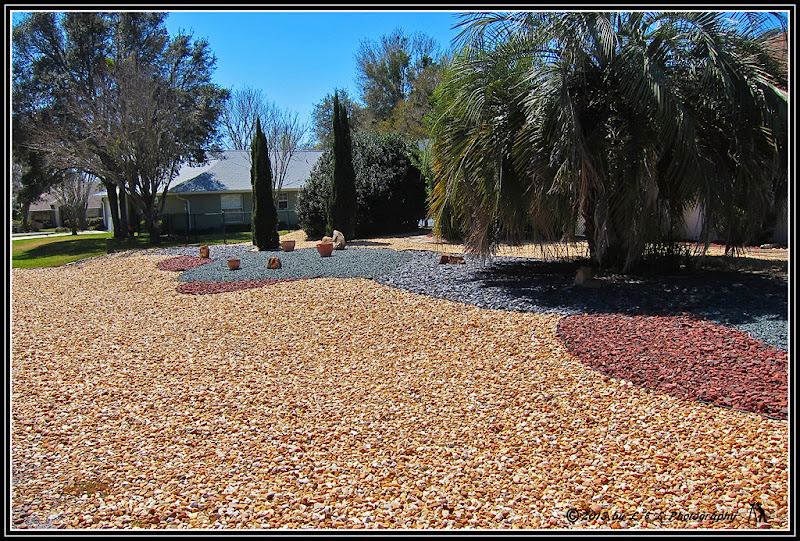 Some people in our subdivision have become tired of watering, weeding and feeding grass. So, they installed a rock yard. It may not be as pretty and you can't play bocce on it but it certainly involved less maintenance!
Posted by Lowell at 6:29 PM 22 comments:

Sometimes a heron will strike a pose! 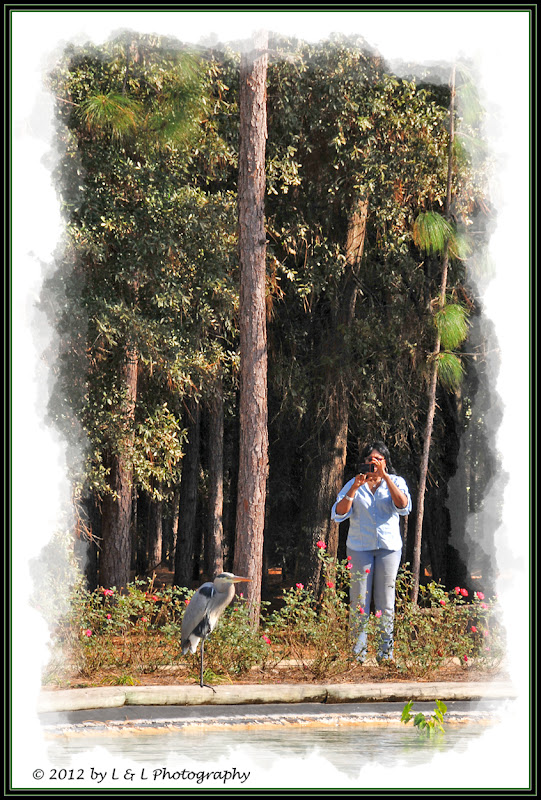 Do not feed or pet the horses! 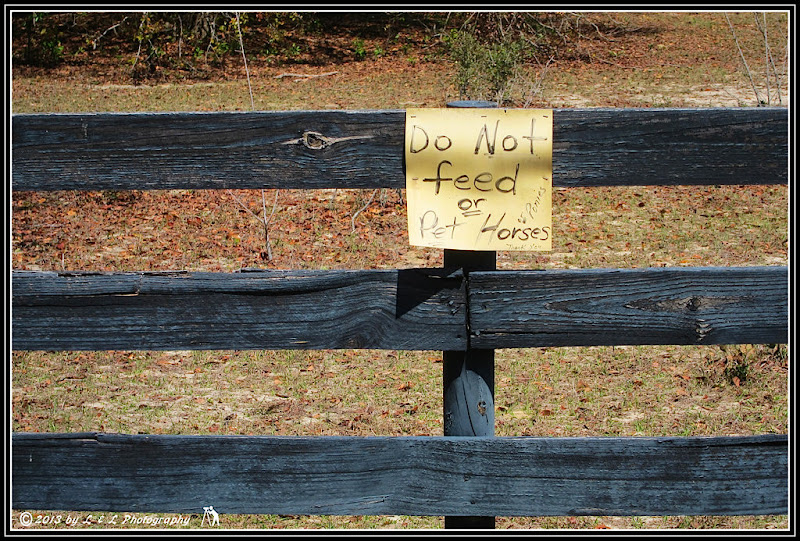 Good advice. And never look a gift horse in the mouth!
Posted by Lowell at 6:41 PM 19 comments: 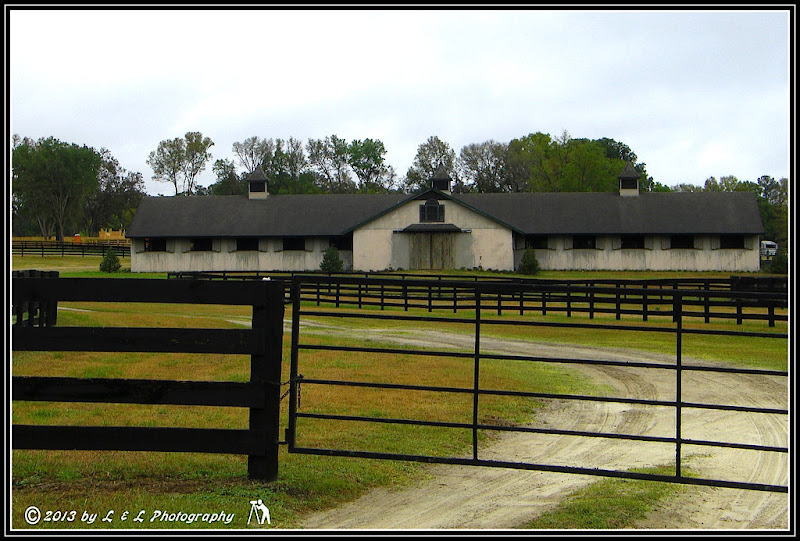 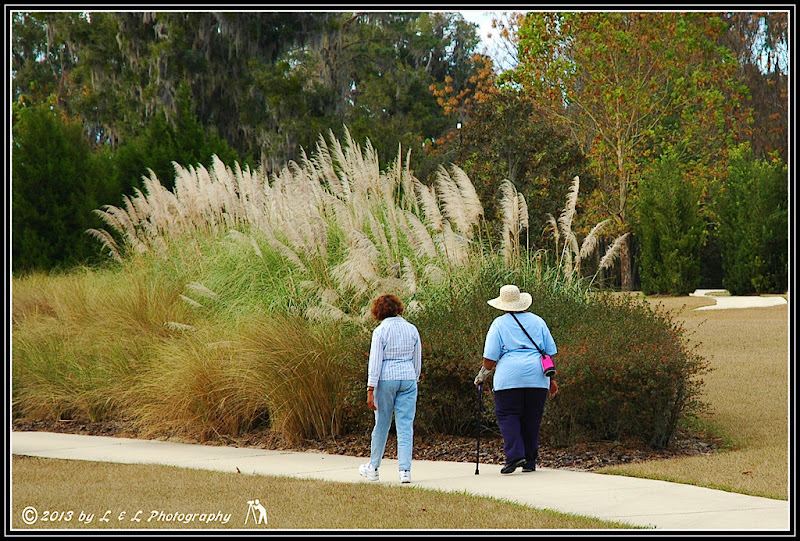 An older woman and her caregiver take a leisurely walk in Sholom Park on a Sunday afternoon.
Posted by Lowell at 5:33 PM 17 comments: 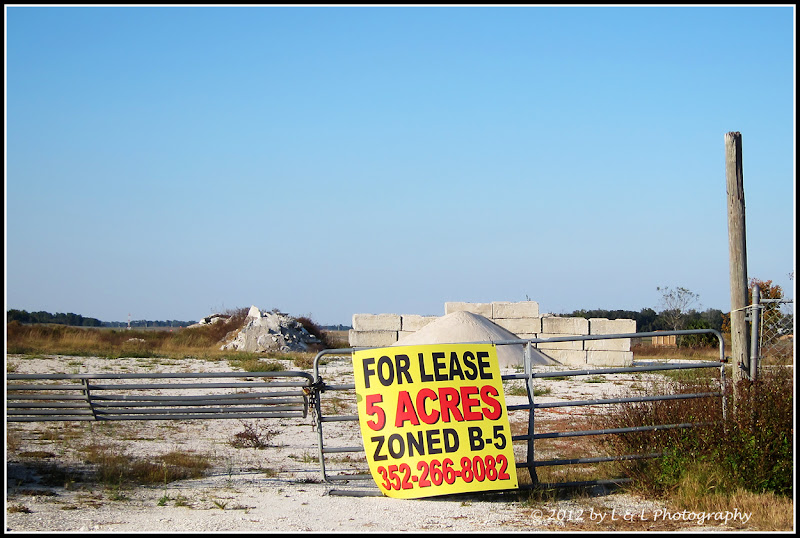 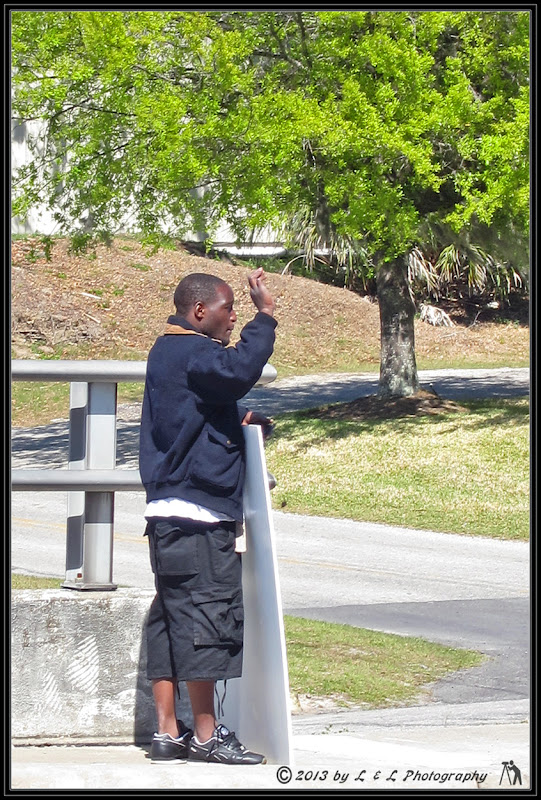 If I recall correctly, this guy was waving at vehicles as they passed by in order to call attention to a laundromat in a small strip shopping center.  He wasn't having much luck.  Perhaps, however, when people need a laundromat they will remember this guy and bring their clothes in for a wash.

It seems we are getting more and more of these "sales" people standing on street corners or in front of a business with a sign or flag or something to catch the attention of folks driving by.  Some of them dance a jig, contort their faces, jump up and down, and generally act like idiots.

I find them distracting and have often wondered how many people have crashed into a tree or another car while watching their antics.
Posted by Lowell at 6:07 PM 20 comments: 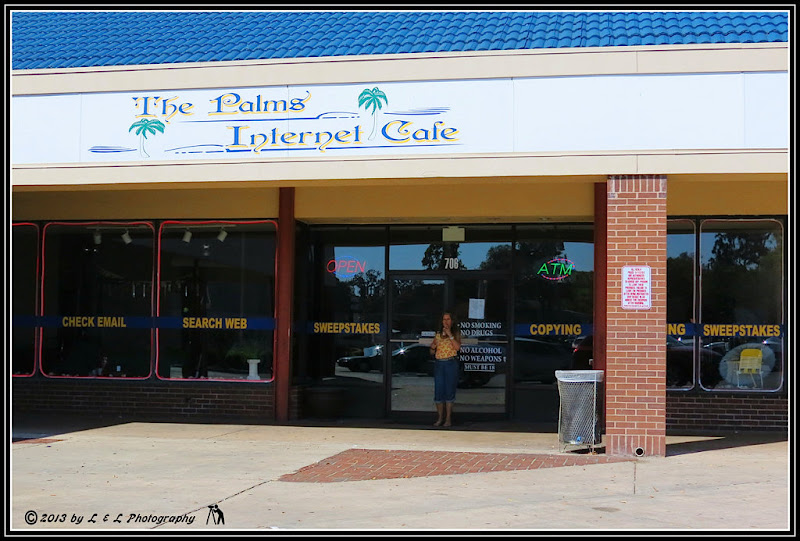 The Palms Internet Cafe, located in a strip center on Highways 441/27/301 near downtown Ocala, was the site of an attempted robbery by two 19-year old men last July.  But these teens did not count on a 71-year old man with a gun.  Samuel Williams, a patron, pulled out his .380 pistol and began shooting.  The teens fled the scene but not before being shot and wounded by Mr. Williams.  They were later captured and arrested by the police.

Mr. Williams is licensed to carry a concealed weapon and was not charged.

One of the teens, a former employee of the "cafe," hatched the robbery plot with a friend, thinking there would be a lot of cash available and that the cafe would be an easy mark.


Such Internet cafes, which provide food and drink for their patrons, are essentially gambling houses, or as someone else said, they use the Internet as "a portal to online gambling."

The State of Florida has, however, just recently passed a law banning such cafes.  While I don't care at all about Internet cafes, this ban makes no sense to me, because one can gamble via the state-sponsored lottery and in casinos on Indian reservations throughout the state.  But in Florida, hypocrisy is the name of the game.  And you must remember, our governor, Rick Scott, is a hypocrit writ large, being the criminal who committed the largest case of Medicare fraud against the U.S. government in history!

To summarize:  Never underestimate a 71-year old man with a concealed weapons permit.  And if you want to gamble in Florida, you're now going to have to find somewhere other than an Internet cafe.

You an see a video of the attempted robbery here.http://www.youtube.com/watch?v=HT2na0WG1uA
Posted by Lowell at 6:43 PM 13 comments: 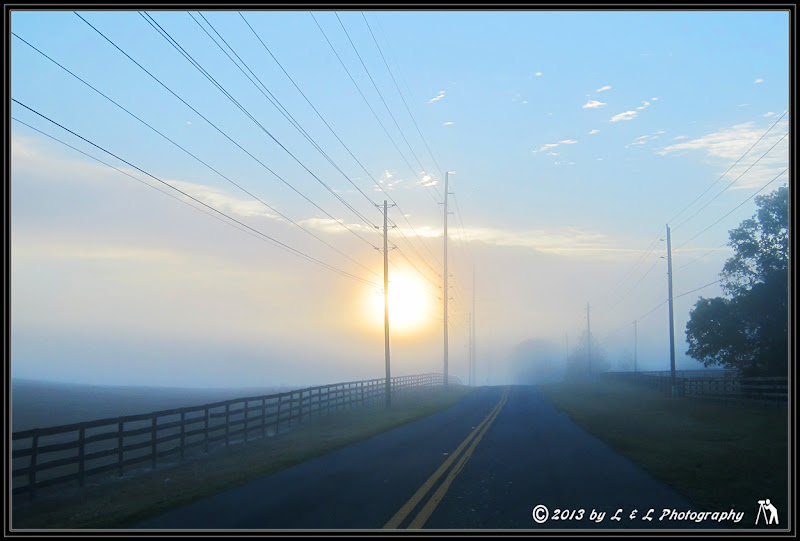 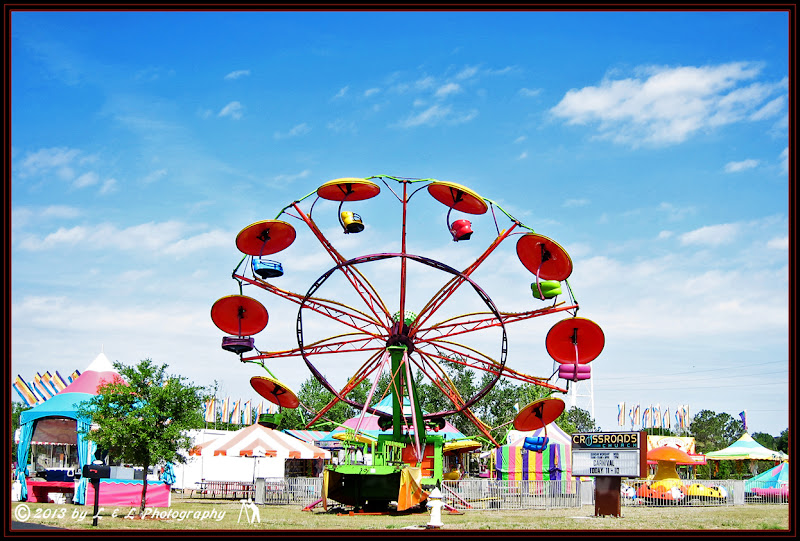 Crossroads Church appears to be a relatively small fundamentalist Christian group. I'd guess this carnival is functioning as a fundraiser of some kind. The photo was taken on Sunday morning which is undoubtedly the reason there are no hordes of screaming kids! :)
Posted by Lowell at 6:41 PM 19 comments:

Your Next Barbershop - SW Ocala 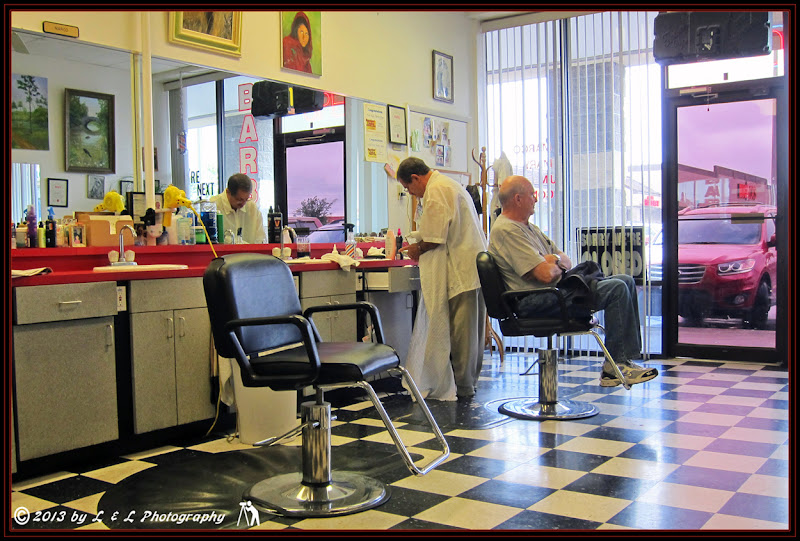 The Lord has risen! 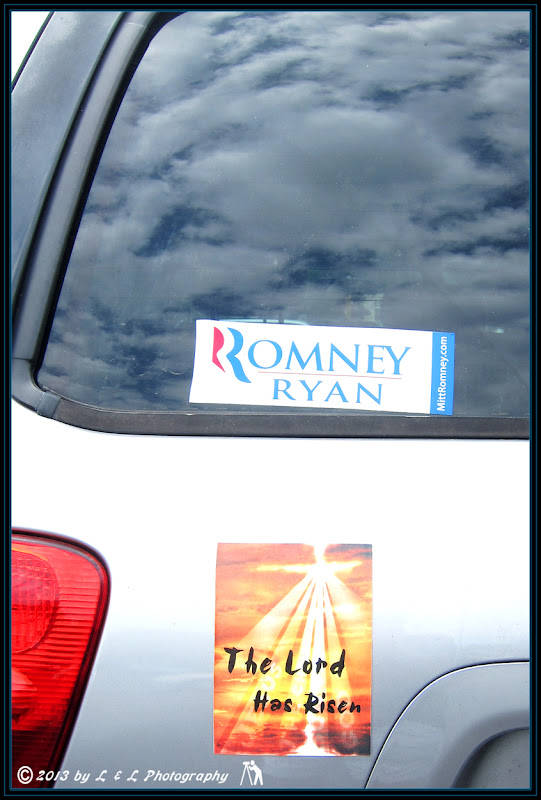 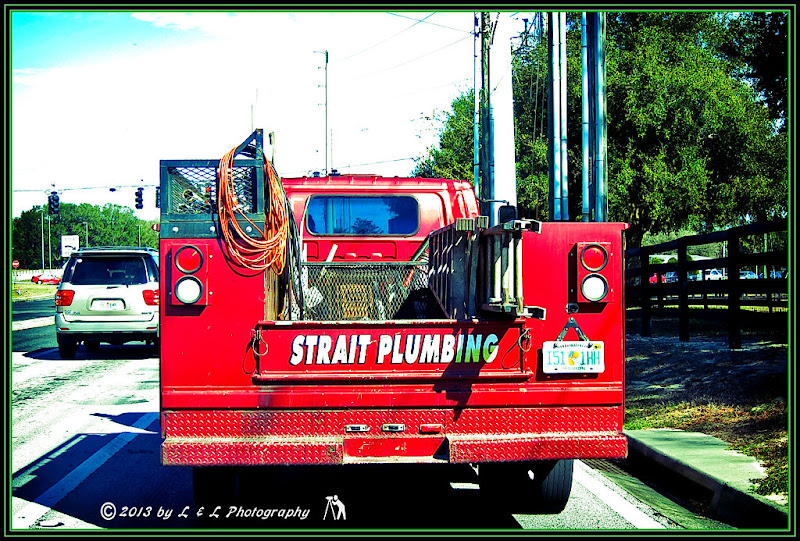 The only problem I see here is that not all plumbing is straight. :)
Posted by Lowell at 6:02 AM 16 comments: 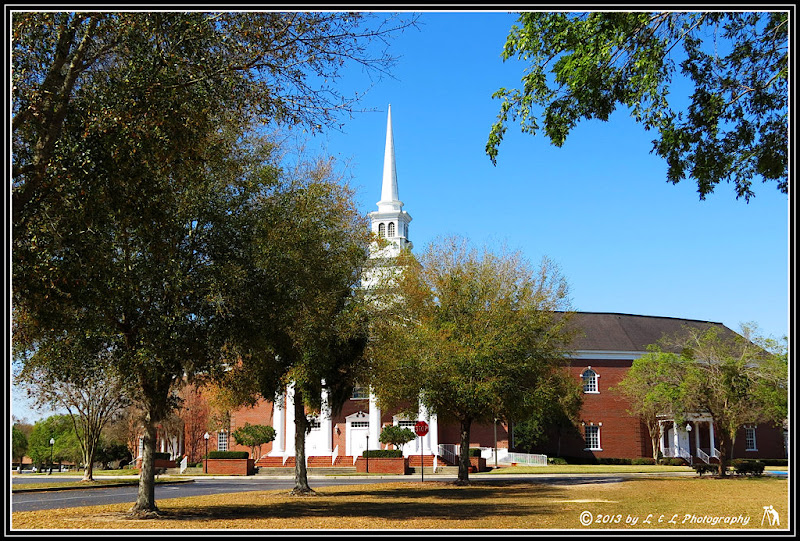 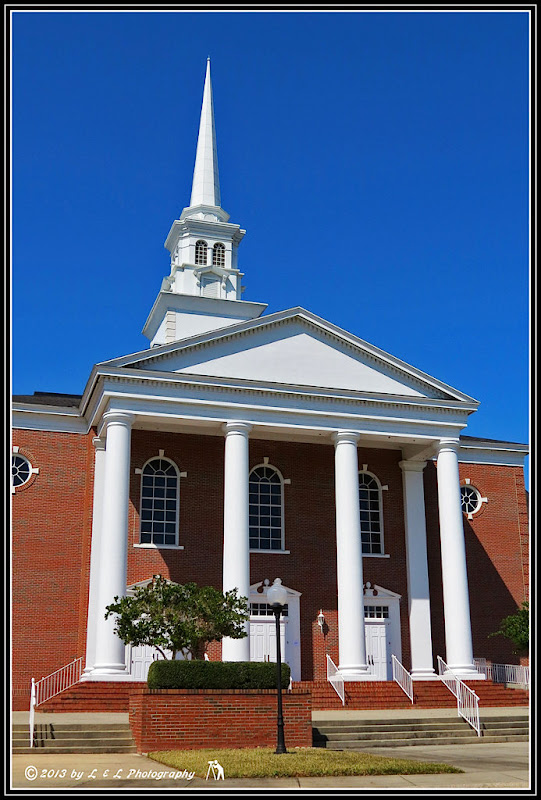 Of the more than 200 Baptist churches in the Ocala area, First Baptist is undoubtedly the largest and most impressive. It is a huge complex sitting on several acres on the southeast side of town.
Posted by Lowell at 3:32 PM 18 comments: 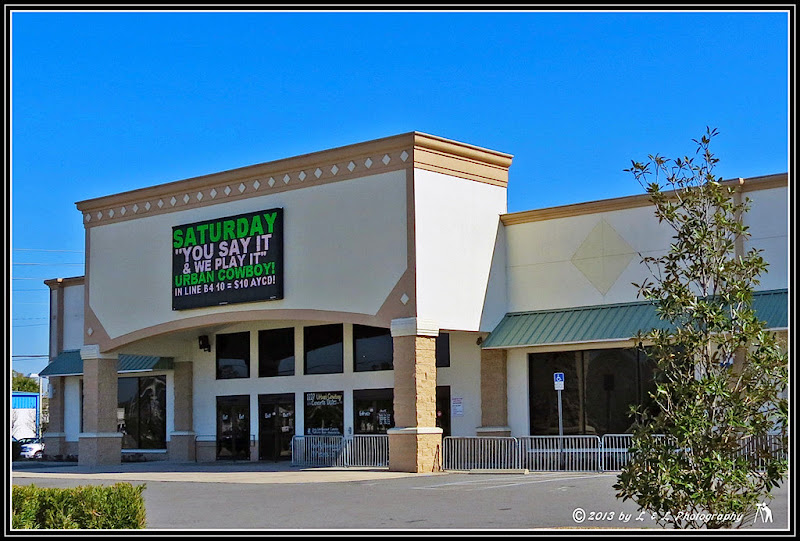 In 1980, the movie, "Urban Cowboy," hit the silver screen. At the time we lived in Houston. Some of the movie was filmed at a nightclub called "Gilley's," owned by the country singer, Mickey Gilley.

One night we visited Gilley's and it was just like you saw in the film, including the mechanical bull.

You may also recall that the protagonist was "Bud" Davis, played by a younger John Travolta.

Today, in Ocala, we have a relatively new country-western themed nightclub called Urban Cowboy. You can read all about it here.

Coincidentally, John Travolta, a bit older and wiser perhaps, owns a home here in Ocala and some say he can be found shopping at Walmart in the middle of the night.  Sometimes.  I wonder if he'll ever patronize the Urban Cowboy?
Posted by Lowell at 7:39 PM 15 comments:

Pond in the elite section of the Historic District 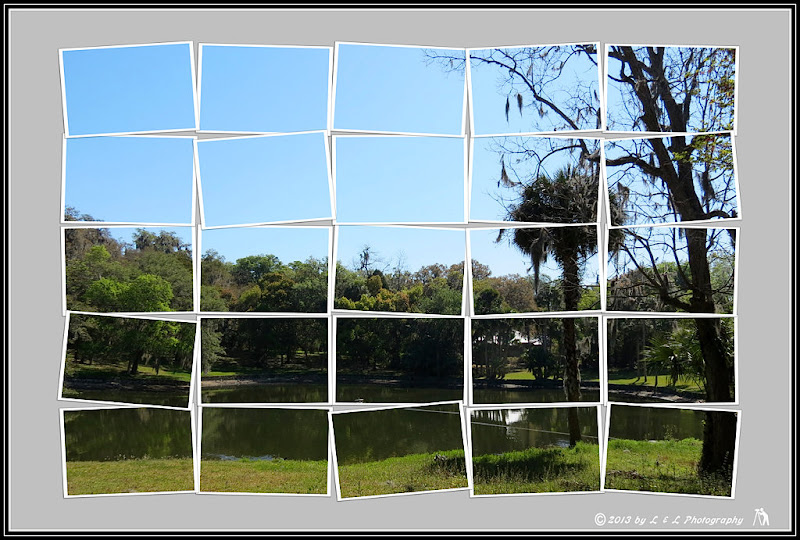 Shopping might be thought of as quality family time - or not 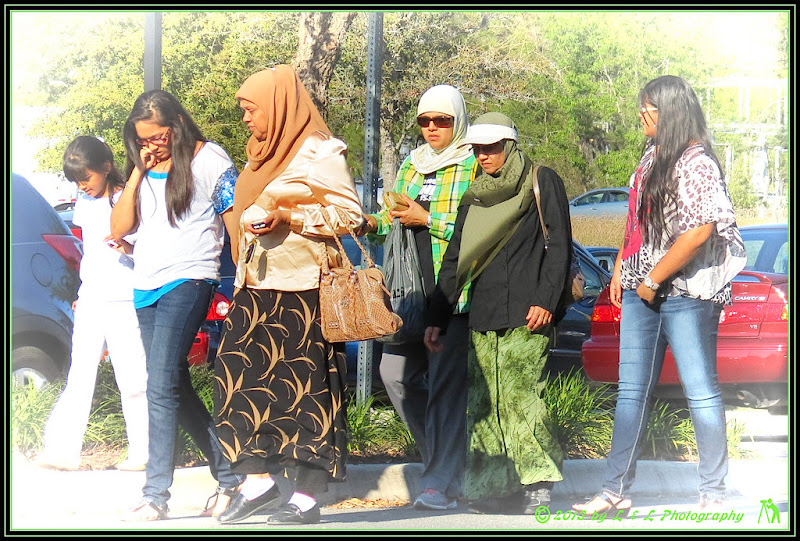 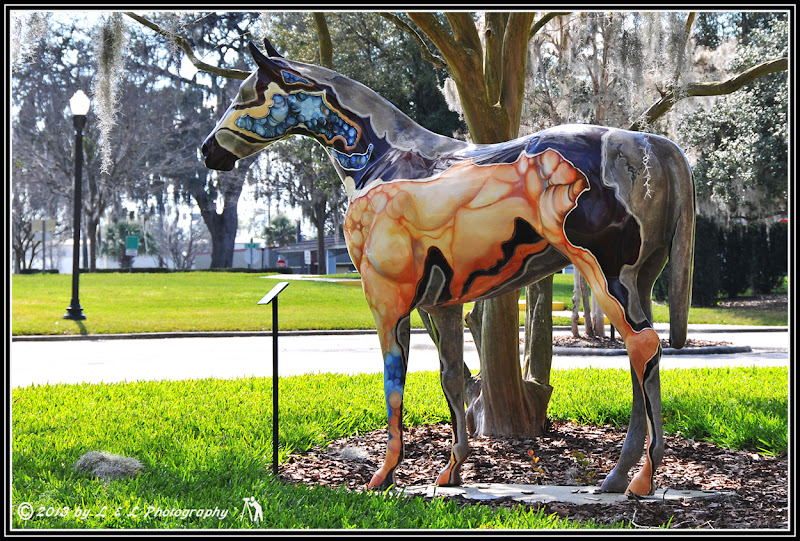 Several commenters on the previous post suggested the "Horse Capital" sign could use a horse of some kind. Well, there's a horse in front of City Hall. Perhaps they could move that over to the sign. I'll pose that solution to the the powers-that-be just as soon as I can get MY horse saddled up and ready to leave town.
Posted by Lowell at 6:02 PM 21 comments:

Ocala - Horse Capital of the World 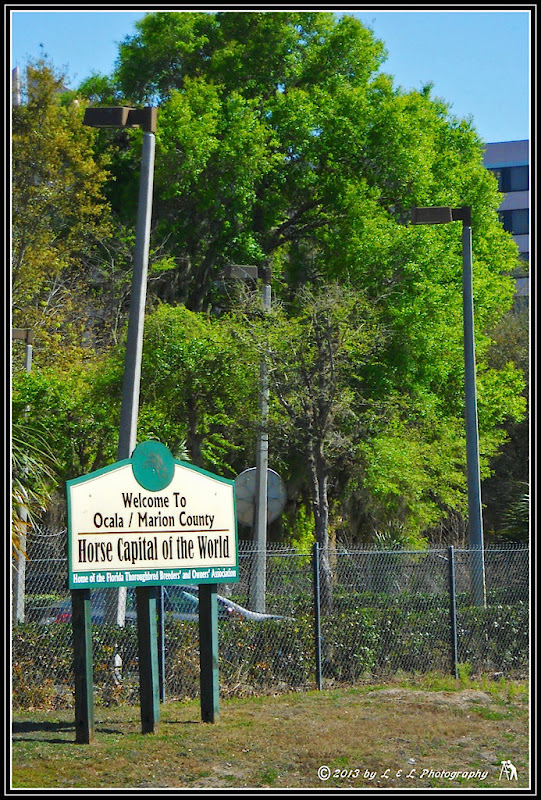 As people head into the city on Highway 200, this is what they see.  Not a very impressive sign.  The "horse capital of the world" ought to be able to do better!
Posted by Lowell at 3:41 PM 16 comments: 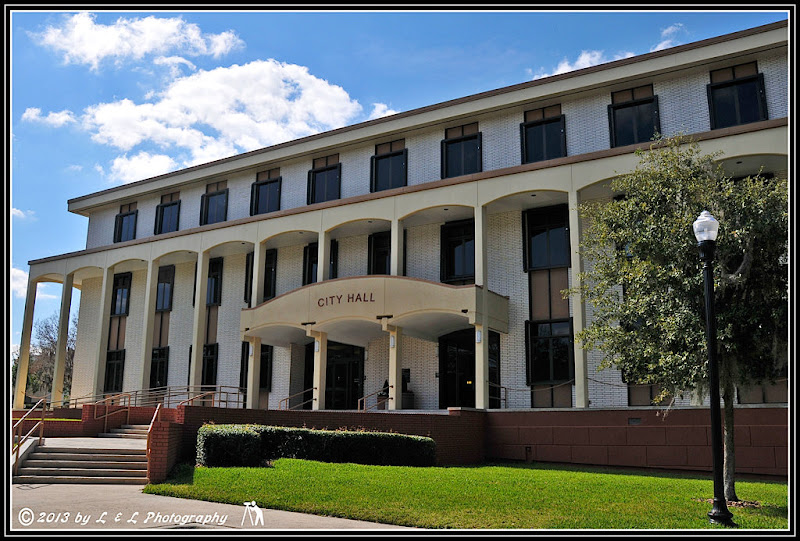 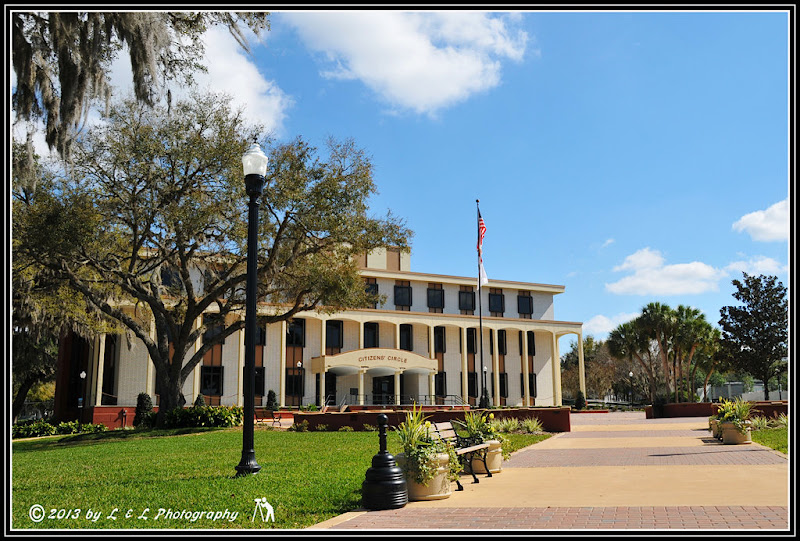 Ocala's "powers-that-be" have chosen to spruce up the old downtown area. One of their project was to refinish and refurbish City Hall. The best part of that, in my opinion, was the construction of a European style plaza on the western side of the building (2nd photo).
Posted by Lowell at 1:37 PM 22 comments: