Outside dining at Panera Bread 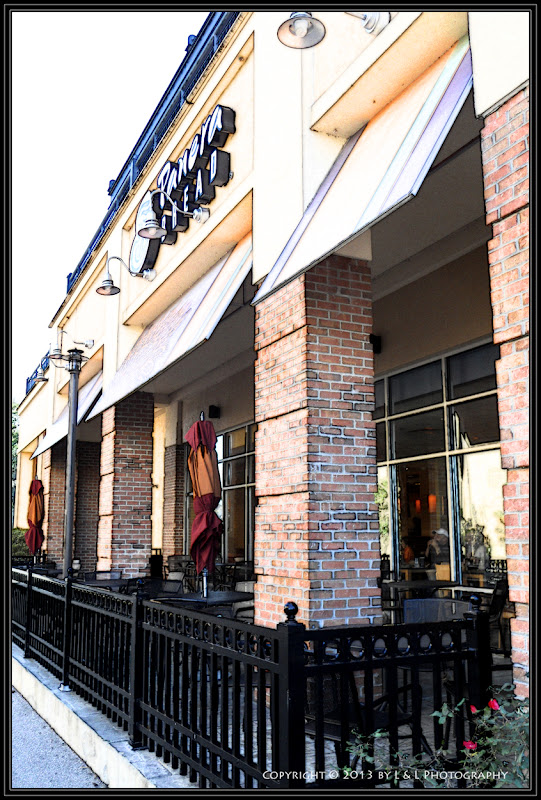 The theme for March 1st (for City Daily Photo bloggers) is "cafe chairs." Panera Bread has cafe chairs outside. Click here for theme photos by other bloggers.
Posted by Lowell at 6:59 PM 23 comments:

The College of Central Florida 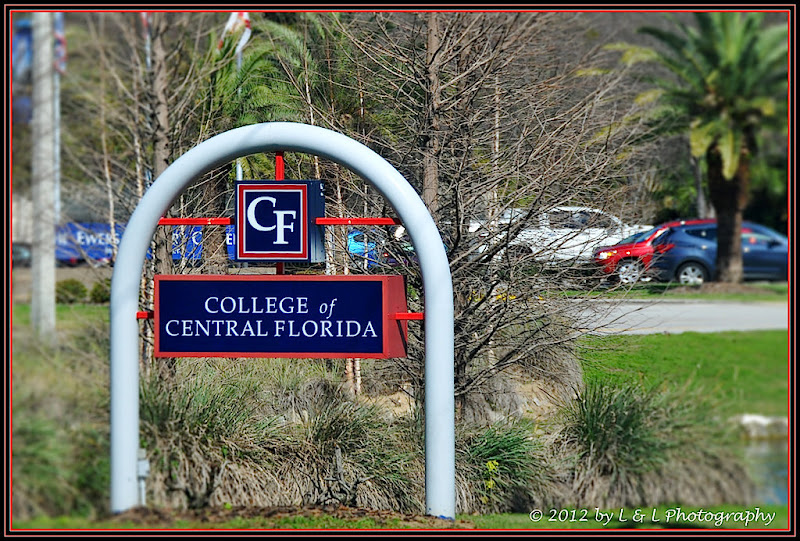 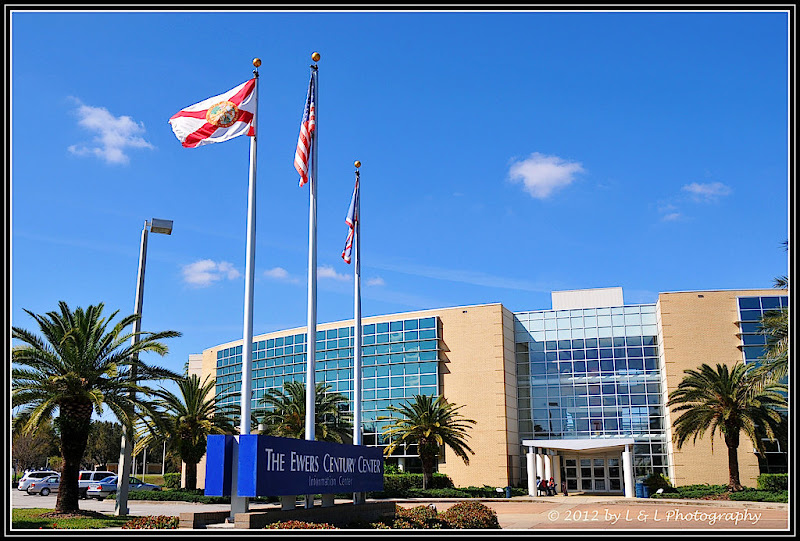 The College of Central Florida was previously known as the Central Florida Community College- a 2-year institution.  Since we moved to Ocala eight years ago, the school has been able to upgrade to a full 4-year college offering a variety of degree programs.  It has an excellent reputation and provides a great learning alternative for people who cannot afford the cost of attending one of the larger universities.
Posted by Lowell at 5:59 PM 19 comments: 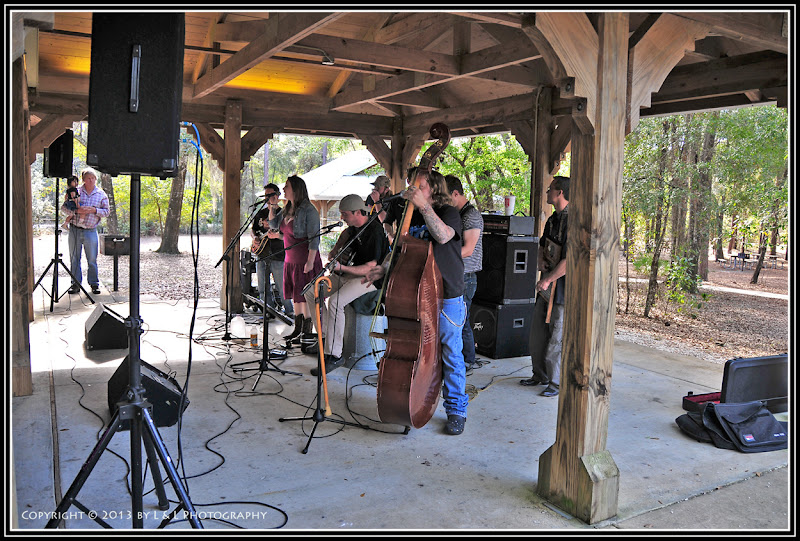 Entertaining visitors at the Silver River State Park was this group - a good ol' country band, singing good ol' country songs, just like Willie sings 'em. Don't know the name of the group, but I heard tell they was from the city of Jacksonville! And they weren't half-bad.
Posted by Lowell at 6:42 PM 20 comments: 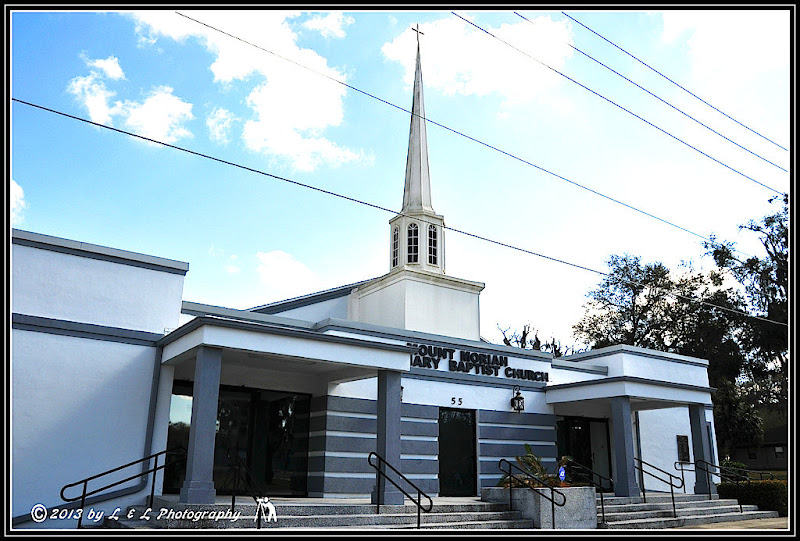 Mt. Moriah Missionary Baptist Church is an Ocala landmark and is one of over 200 Baptist churches in the Ocala area.  It is located near the downtown square.
Posted by Lowell at 6:11 PM 15 comments:

A rising sun paints the sky 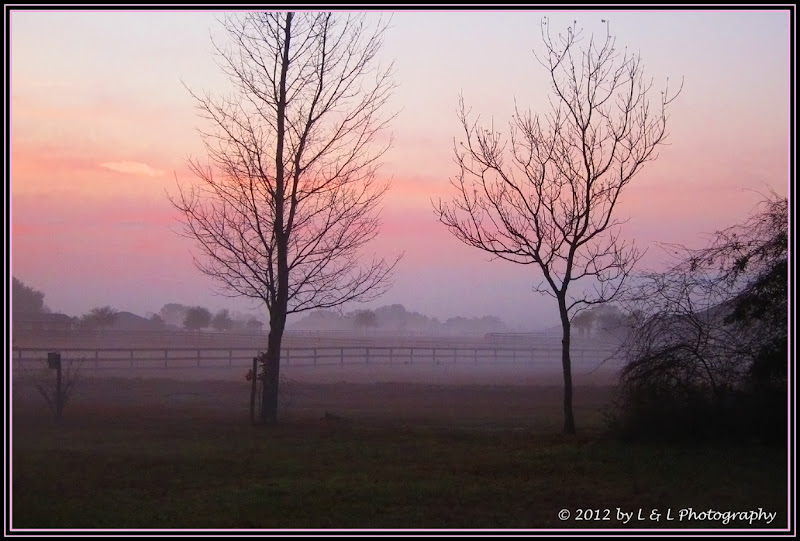 I thought a sunrise would be a good way to start off a Monday. This was taken 2-3 weeks ago from our back yard. Those trees are now almost filled with leaves.
Posted by Lowell at 5:48 PM 24 comments: 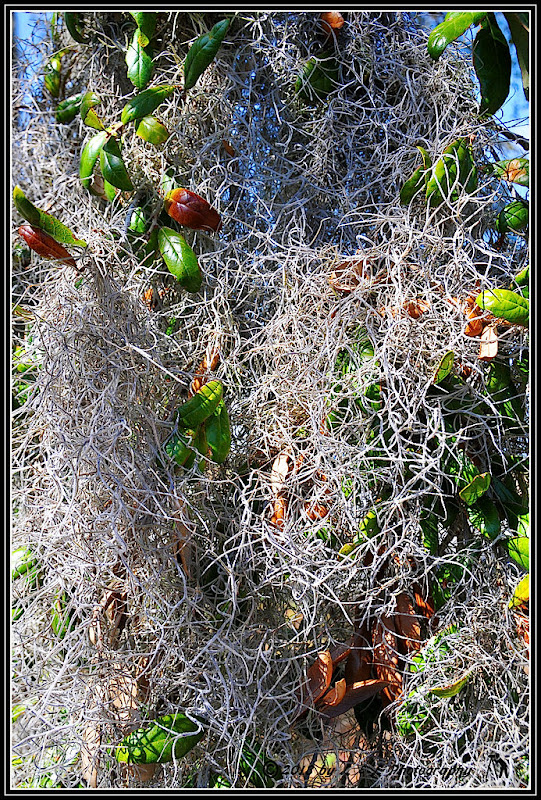 It seems that for many people, the so-called Spanish Moss has a romantic connection. Look carefully. It is awful - scratchy, and full of little critters and personally, I believe it is damaging to trees, although one tree expert said that was a myth. Notice it has just about suffocated this magnolia tree.
Posted by Lowell at 5:39 PM 22 comments: 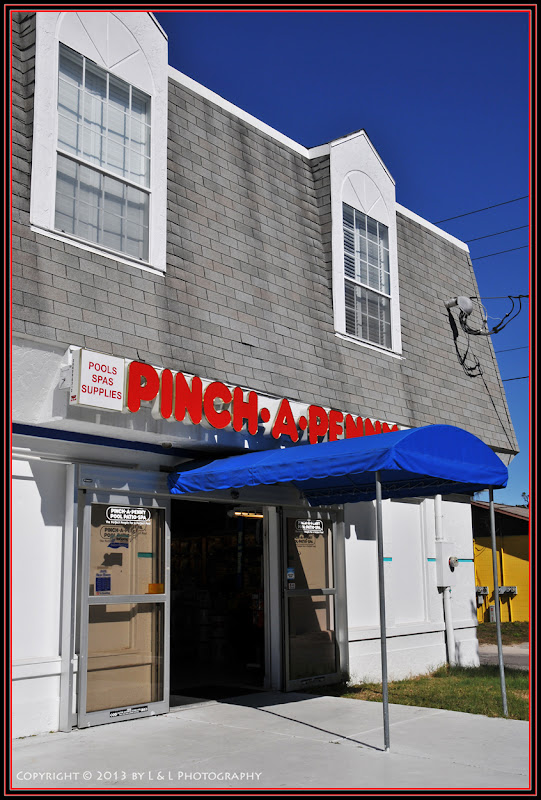 We had been living in Florida for awhile and I had seen several Pinch-a-Penny stores while driving around the state.  At that time their signs read simply, "Pinch-a-Penny," with no further explanation.  We did not own a swimming pool back then.

I thought Pinch-a-Penny was, like the name suggested, some kind of discount store.

One day while out for a drive, we saw a Pinch-a-Penny store and I asked my beautiful spouse if we should stop and see what was on sale.  She said, "Sure!"  Hah!  When we got close, we realized that it was definitely not a discount store but rather an outlet for pool and spa supplies.

Chagrined, we drove away and didn't go back until one day some 20 years later when we foolishly bought a home that included a swimming pool.  Perhaps you've heard the expression: "A swimming pool is nothing more than a hole in the ground into which you pour money. "  That's the truth!

And yes, we became very familiar with Pinch-a-Penny.  We filled their cash registers with a substantial amount of our money for chlorine and all the other chemicals a pool requires on a regular basis.  We gave Pinch-a-Penny money for filters, for pool gadgets, for thermometers...and the list goes on and on.  Our pool required a new pump, a new filtering system, and the thing had to be patched.

Every once-in-awhile, we swam in it.

Finally,  I called a large local pool company and asked what it would cost to fill the damn thing in with dirt.  I swear I heard raucous laughter but in a few moments the lady who answered the phone very sweetly informed me that it costs just about as much to fill in a pool as to build a pool.  Aaargh!

We no longer own a pool.  We now have a hot tub/spa.  On the lanai (patio).  It's much less labor- and chemically-intensive.  But I'm still giving money to Pinch-a-Penny to keep the hot tub afloat - about $400 in the past three weeks.  Is that a good deal or what?
Posted by Lowell at 6:33 PM 21 comments:

Is liquor the solution? 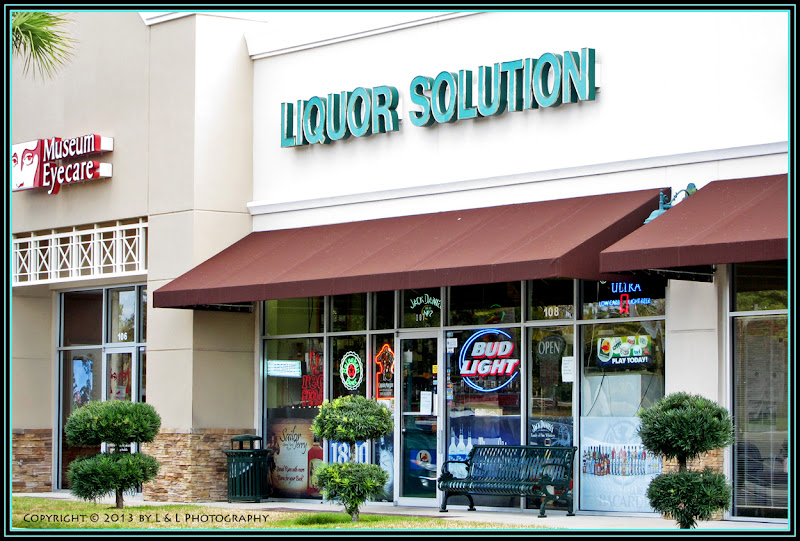 I'm afraid the folks who run this place didn't think through the name thoroughly enough.  Too many people have believed, to their detriment, that liquor was the solution to their problems.

I know that's not what the owners intended with the name, but still...

Reflecting on the homeless who beg on the corner 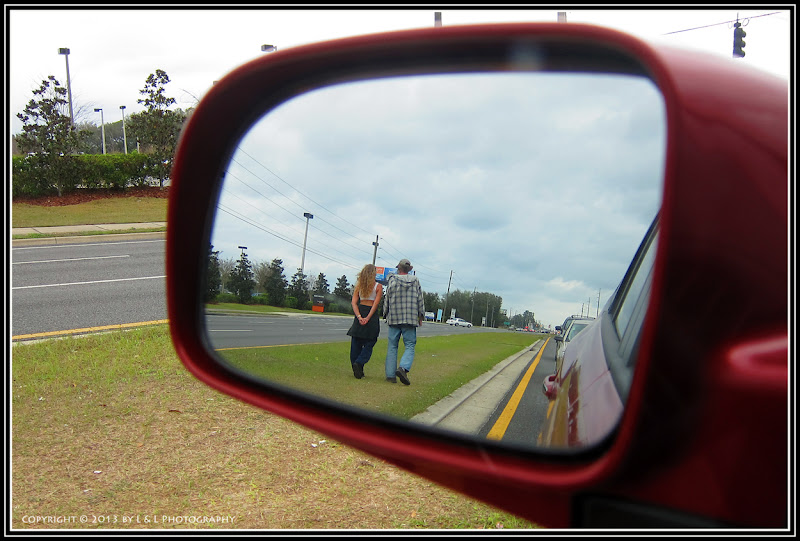 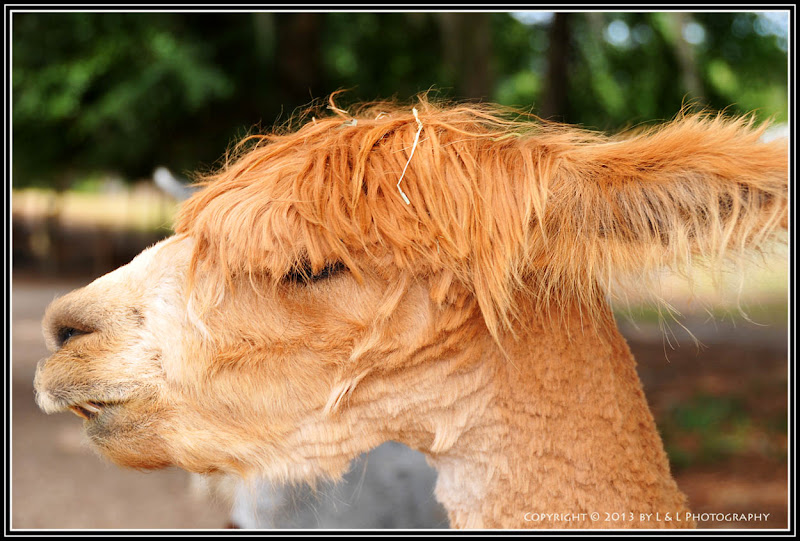 Who would think you'd find a model alpaca in Ocala, the "Horse Capitol of the World"?
Posted by Lowell at 6:33 PM 28 comments: 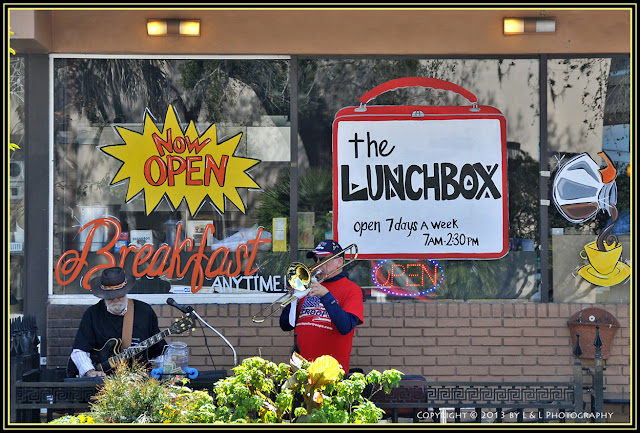 It was great to see this duo making music in the downtown area.  The poobahs who run things in Ocala are trying to renovate the old downtown area to make it more "family friendly" and more attractive to locals and visitors.  Thus, city hall has been redone with a European-style courtyard, a new parking lot is planned which I believe will include residences on the upper level, more unique restaurants are in the works, and a variety of artists are being encouraged to share their skills with the public, etc.

This is all good.  And these two guys were quite good!  The one on the right played a wicked jazz trombone!
Posted by Lowell at 4:47 PM 27 comments: 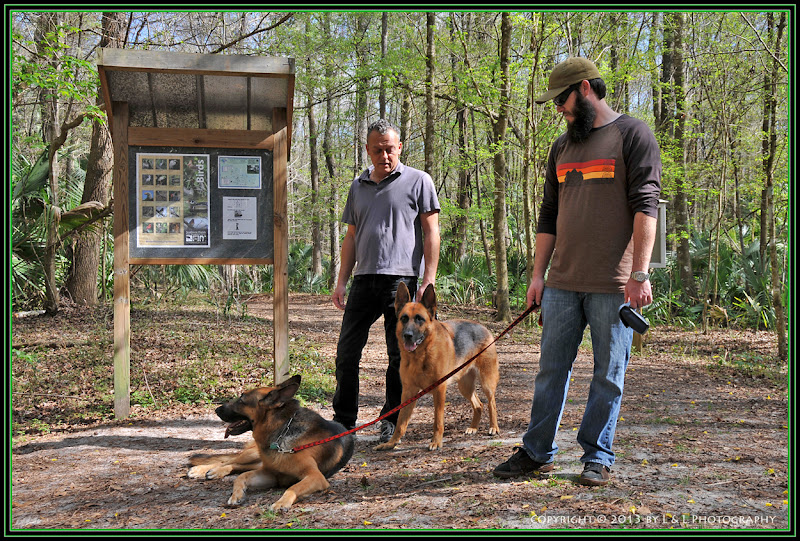 As we meandered down the trail to the Silver River in the Silver River State Park, we came upon these two gentlemen. They were walking their dogs. I asked if I could take their picture and they agreed. One of the dogs immediately lay down and pretended not to notice the camera. The other dog thought he should go back the way they came so it took a little effort to get him to face the camera. In the end, I got the photo, and the men took off. They were not much for conversation. The meeting was kind of mysterious.

Thank you for all your comments on yesterday's post. No, it didn't snow in Ocala. I have read somewhere that a few flakes fell once. In 1986, I think. But I wanted it to snow and Photoshop was able to grant my wish. Below is the original photograph. It was foggy that morning, but fairly warm. 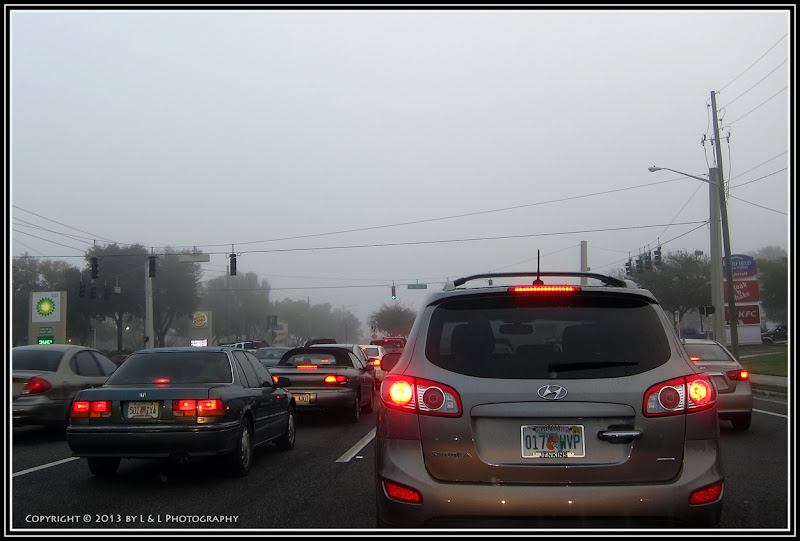 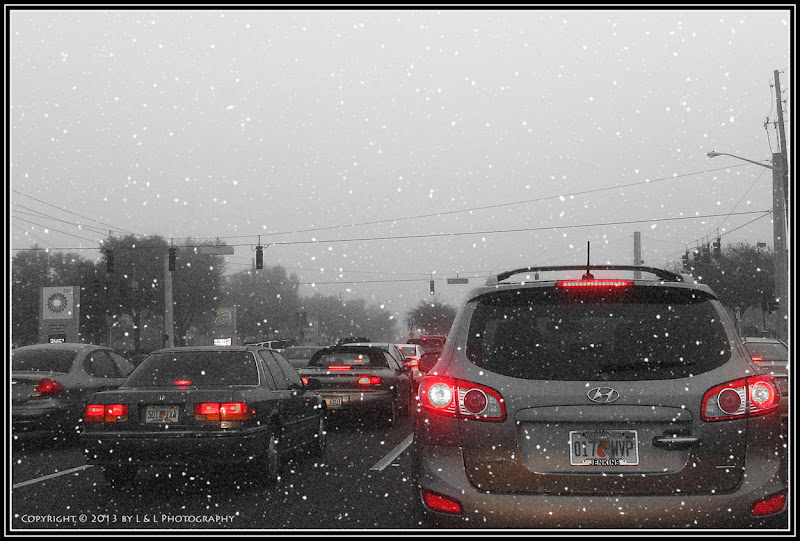 ...that on the way into town, on a cool, gray morning, it started to snow in Ocala? Someone once said that pictures never lie.
Posted by Lowell at 6:41 PM 24 comments: 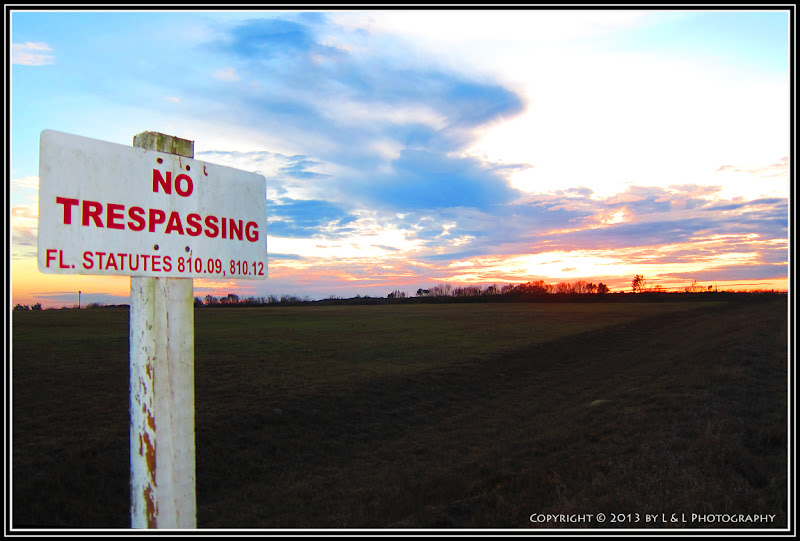 It's a well-known fact that you cannot just walk into a sunset!
Posted by Lowell at 5:51 PM 20 comments:

We've been blessed with some warmer weather the past week or so and it shows. Grass is greening, leaves are sprouting, and azaleas are blooming!
Posted by Lowell at 6:20 PM 26 comments: 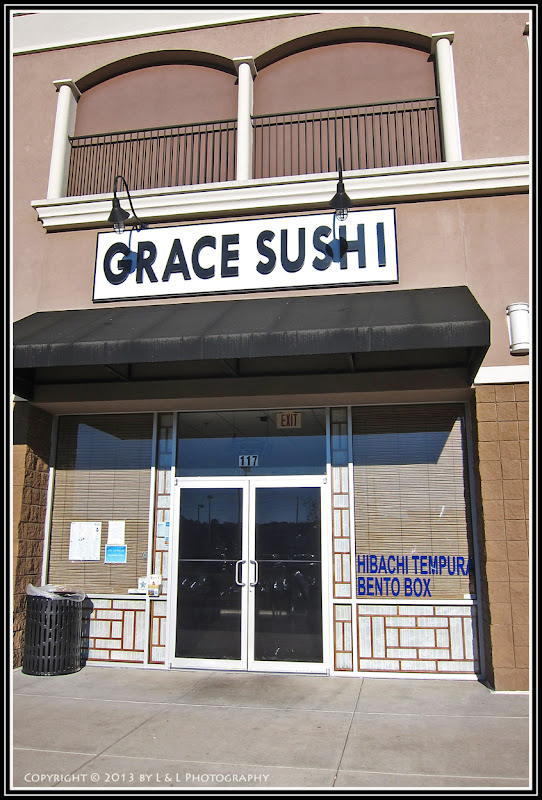 I recently heard about a man who ate Sushi at Grace Sushi. He was a little unstable when he left the restaurant. As he approached the door to leave, he tripped and landed on his backside on the sidewalk outside. While not physically injured, his pride was bent considerably. When I asked how this could have happened, I was told "He fell from Grace!"
Posted by Lowell at 4:10 PM 23 comments:

Leathered up and on the road again 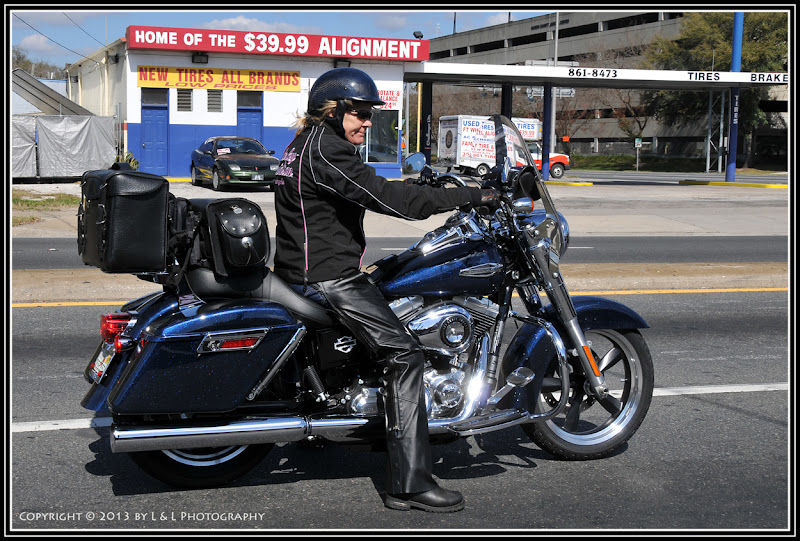 Resident squirrel on a birdcage 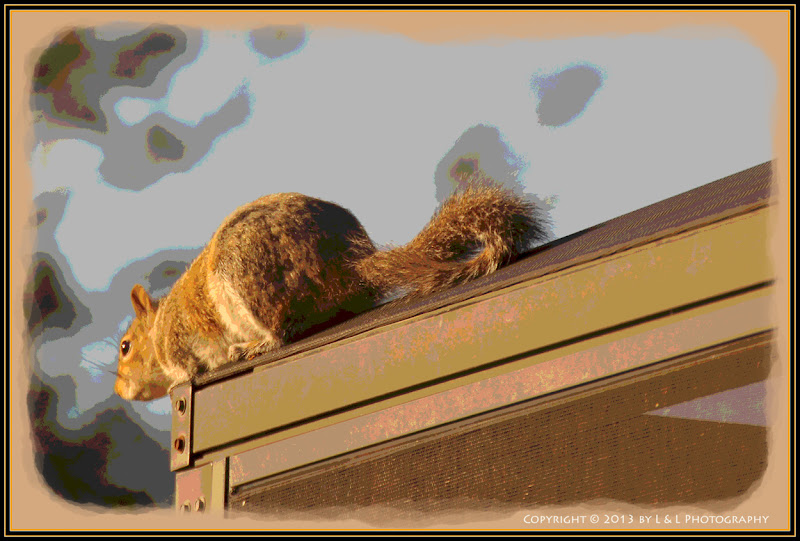 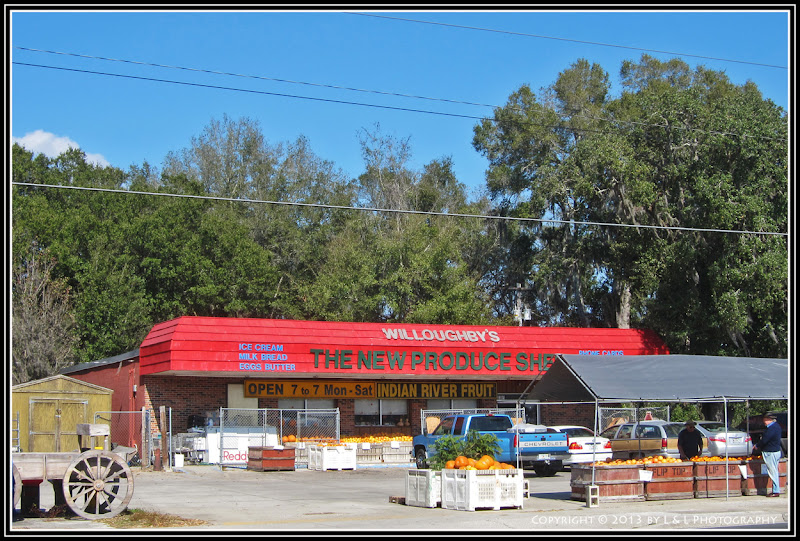 Daniel Willoughby has offered produce for sale at several locations in Marion County for a number of years.  This one is located on SR 40 in Ocala.  I've never shopped at Willoughby's but I remember that another of his sites often featured religious signage - I'd guess as a means of "evangelizing" customers.

Willoughby got in a bit of a fracas with a customer a couple of years ago and was charged with battery.  But due to discrepancies in the plaintiff's story the State's Attorney did not follow through and Willoughby was eventually exonerated of the charges.

Note the pumpkins in the bin front and center.  Pumpkins?  In February?  Well, I think they're pumpkins!
Posted by Lowell at 6:02 PM 15 comments:

The 4 Winns on the Silver River 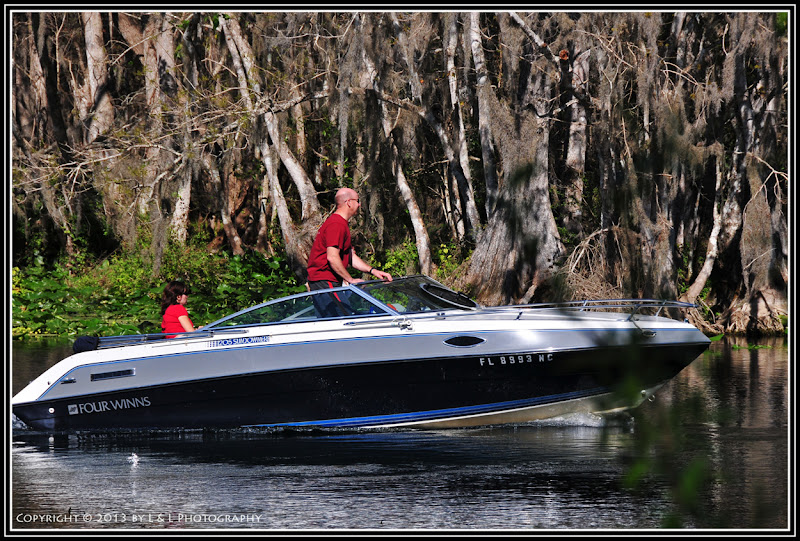 This afternoon, Lois and I hiked down to the Silver River at the Silver River State Park. The Four Winns came by in their speedboat. It was a beautiful sight to behold.
Posted by Lowell at 6:37 PM 22 comments: 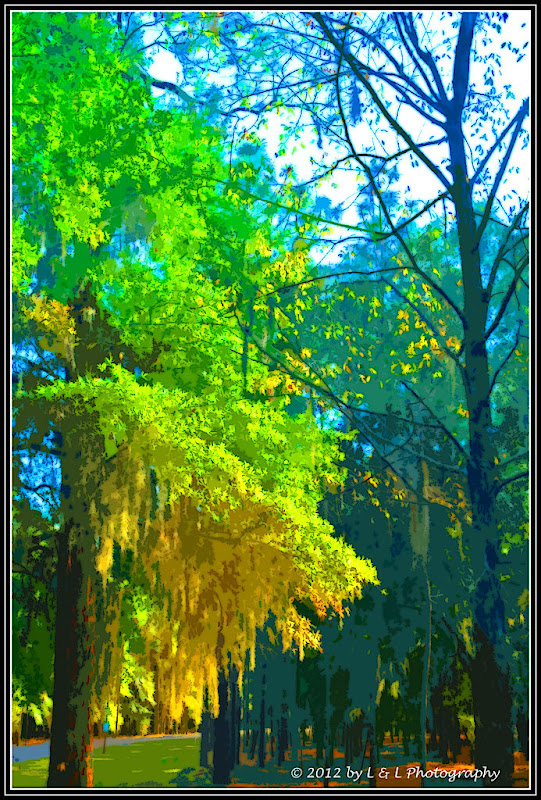 Paint effect by Triqui.
Posted by Lowell at 5:25 PM 18 comments: 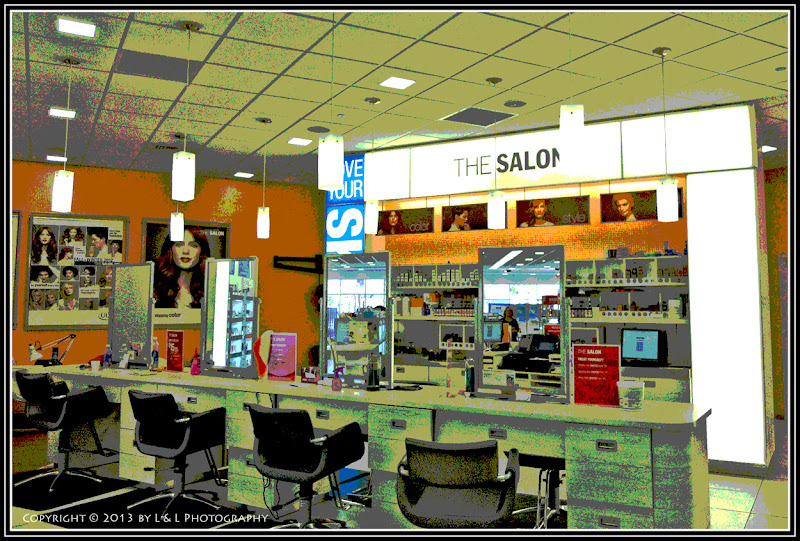 Ulta is a very popular store purveying a variety of feminine products dealing with hair, nails, makeup, etc.  Inside the store is a salon which offers women the opportunity of "fixing" their hair while there.
Posted by Lowell at 6:40 PM 18 comments: 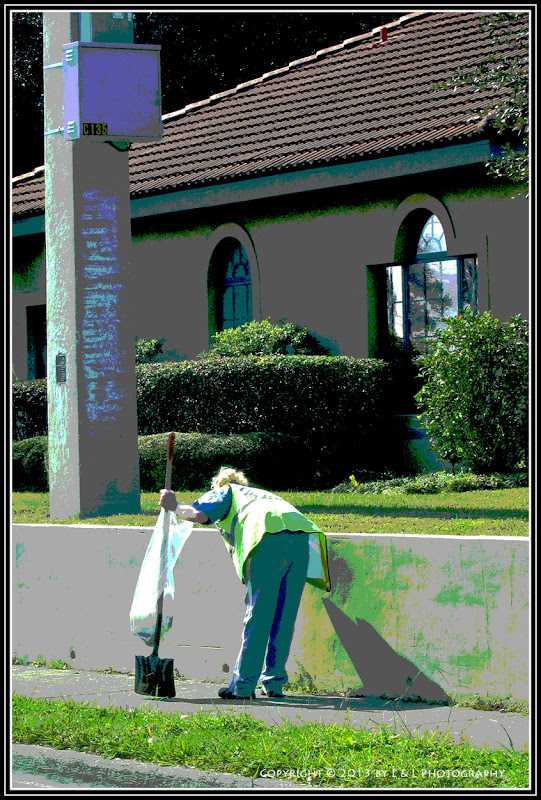 Frequently, county or state prisoners in good standing are released from confinement temporarily to work on civic projects, such as cleaning up streets and sidewalks.  This young woman was part of a contingent of women put to work in Ocala.  I'm guessing they were from the women's prison in, where else, but Lowell, Florida?
Posted by Lowell at 6:49 PM 22 comments: 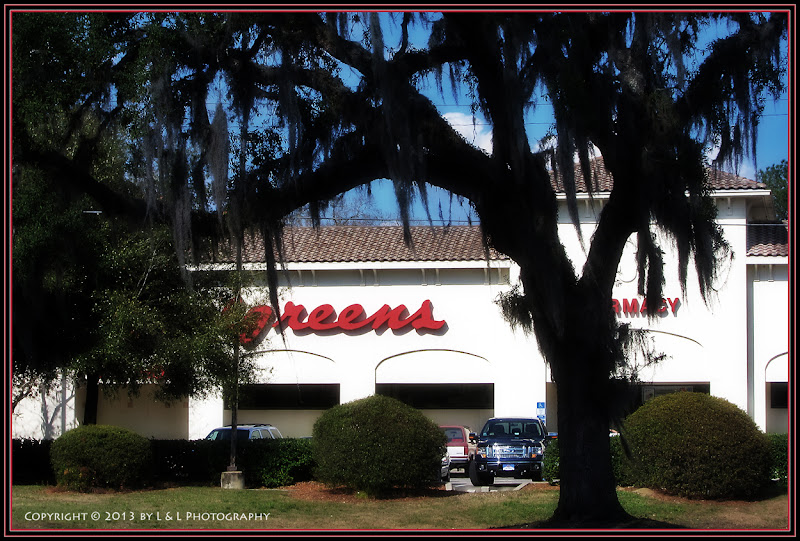 Would you believe that this store, hidden behind the trees, is known for dealing drugs?
Posted by Lowell at 6:59 PM 23 comments:

Mystery at the mall 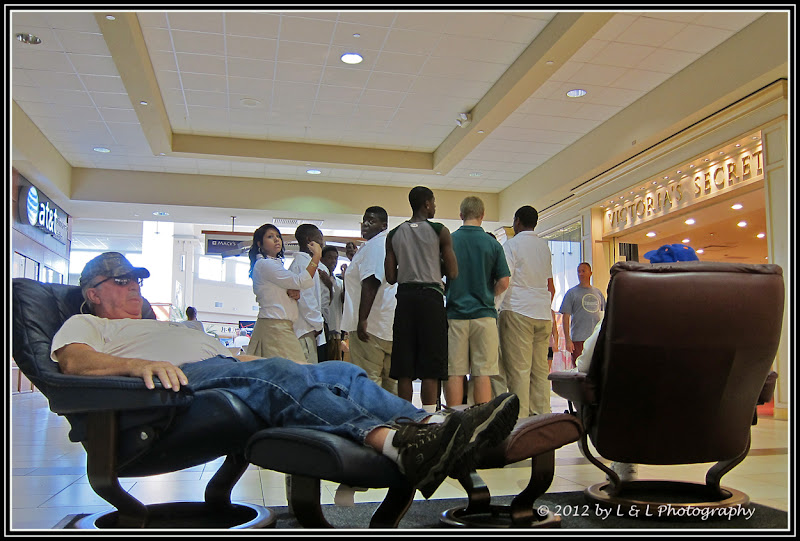 There was this group of young people at the mall.  They moved from one spot to another along the promenades.  They talked in low tones to each other.  At times, some left the group while others joined it.  They were nicely dressed and didn't pose a threat but remained entirely a mystery.  I never did learn that they were doing or what they were all about.  And then they were gone.

As you can tell, the gentleman reclining in the foreground wasn't bothered by them at all!
Posted by Lowell at 7:26 PM 21 comments: 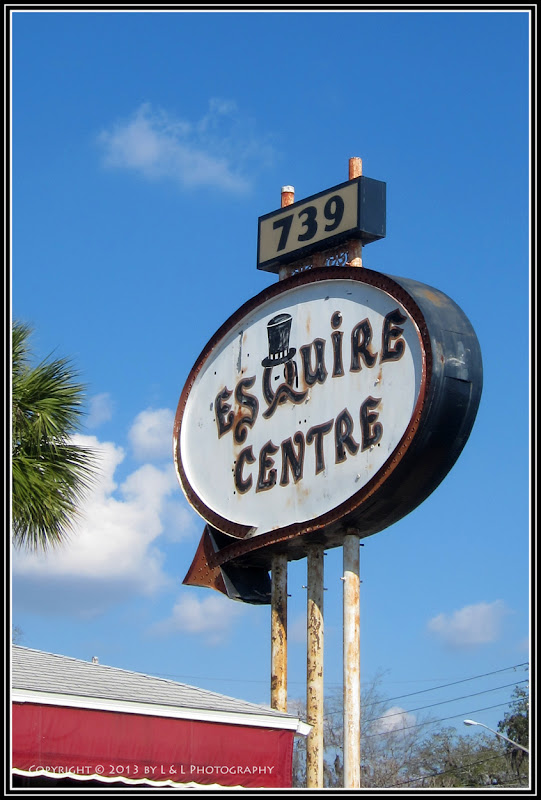 The Esquire Center has lost some of its luster.
Posted by Lowell at 5:00 AM 17 comments: 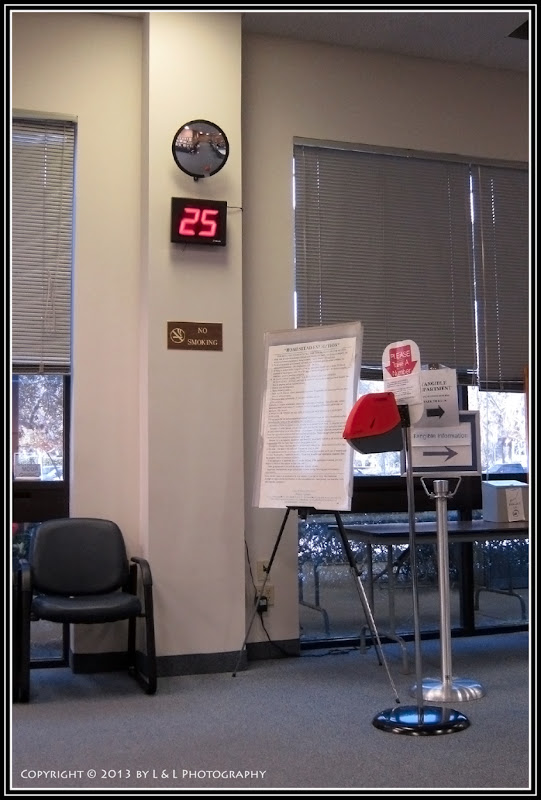 But did you bring
Your checkbook?
Not to worry
We take Visa
Mastercard and
Discover.
I repeat
Take a number
Take your seat.
Posted by Lowell at 6:51 PM 25 comments: 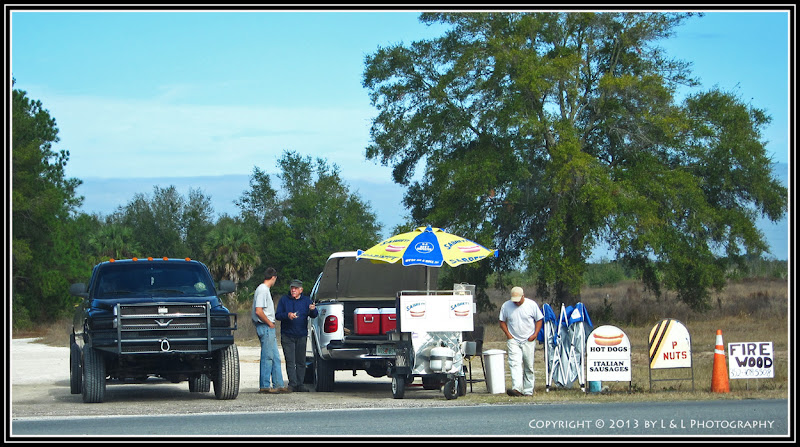