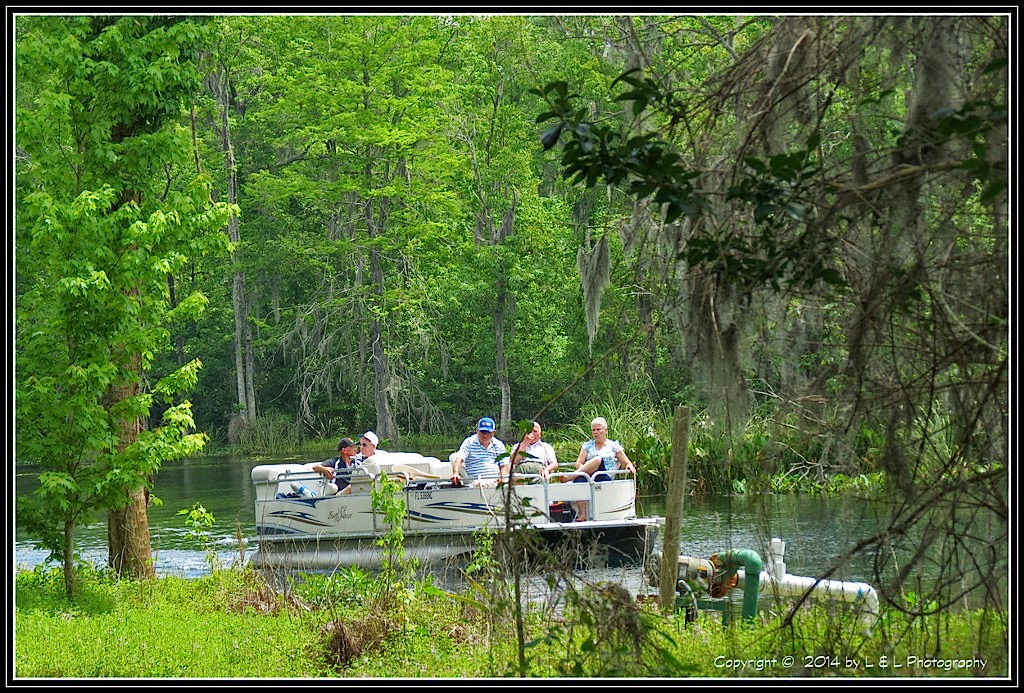 This boat was coming up the Silver River toward the old Silver Springs Theme Park at the same time I was walking down river along the shore line.  I had just mentioned to Lois that this was the area where we saw an alligator back in 1988!  Then the man in the blue hat began yelling at me and pointing. 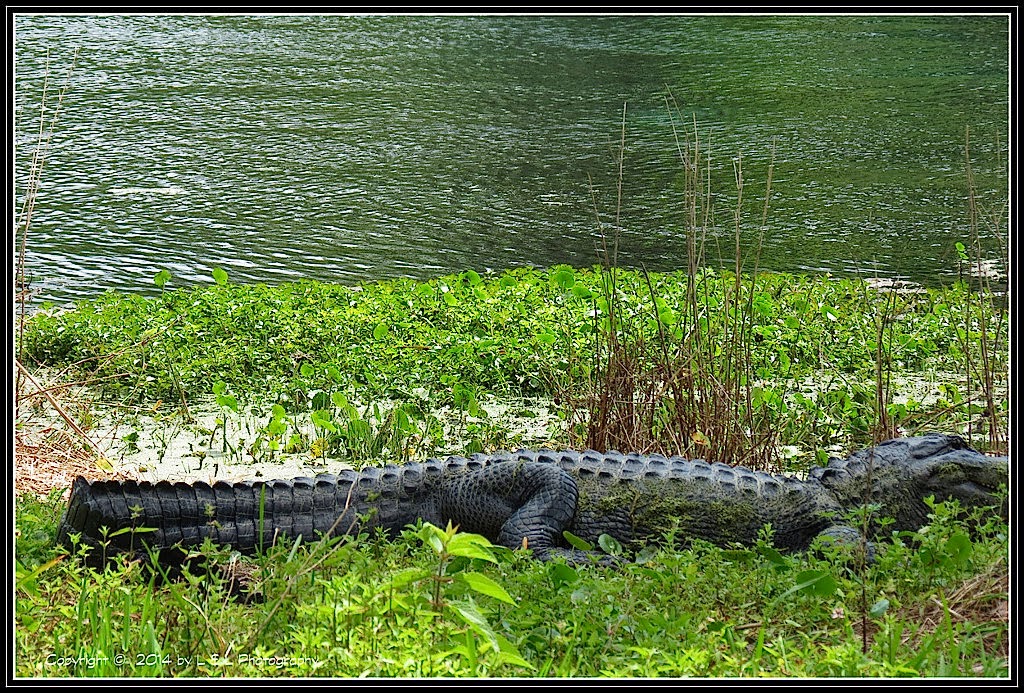 That's when I saw the alligator - all 8 feet of him, sprawled out, soaking up the sun.  I was careful not to get too close as they can run about 35 miles per hour, but I did get to about 10 feet where I took a couple of photos.  As you can see, I missed a portion of his snout as I was a bit nervous.  He was a big one, though. 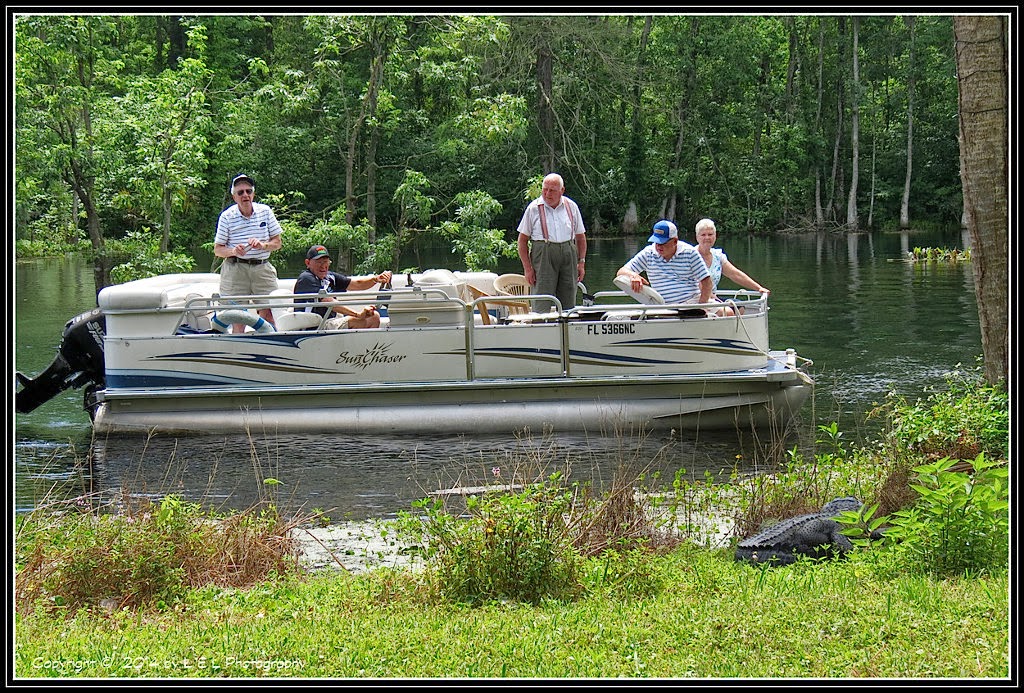 The boat began moving closer to shore, with the pilot maneuvering to avoid possible underwater hazards.  That spooked the alligator which slowly slid back into the river. 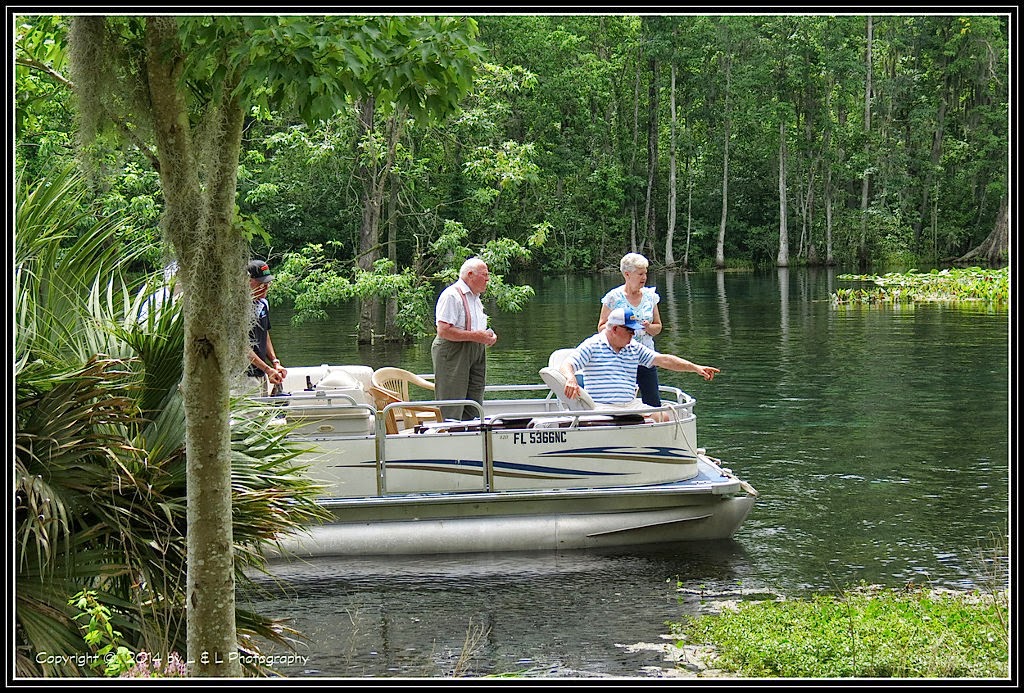 I was not a happy camper as I had missed an opportunity to get a few really good shots.  In this last photo, they are pointing to the spot where they could see the gator in the river.
Posted by Lowell at 2:04 PM

Oh my gosh!! I would have run away at top speed. Don't worry about cutting off the snout, that is the part you have to keep away from. We would all rather have you both in one piece than see a picture of that big mouth just before it bites you. I gotta say, you are a brave couple!

You are way braver than me too! I would have run for the hills!

Nice to see you came out of this adventure all in one piece. :)

Oh, dang! And there wasn't a camera among all the people on the boat. I hate it when people come along and run off critters before they've gotten their portraits! But your 10 feet of closeness was more than plenty. Maybe those boat people saved your bacon...

That is a big one and you are braver than me getting that close to it! Wakulla Springs is just south of me and I've seen quite a few alligators down there, but not one this big.

Well at least we know you weren't a snack.

Yeah well just stay out of reach will ya? Sheesh!! MB

Wow! That was a giant one. I think you got some great shots of him. :)

they prefer stay on board

Yikes I'd be keeping a huge distance from that croc

Holy cow you are a brave soul. I wouldn't have gotten that close. I don't think I'd go walking where these critters might be hiding. All we have are scorpions and rattlesnakes out here, nothing that could eat you whole.

No way! You wanted to get closer Lowell! That's a bit like me wanting to get closer to a white pointer shark :) He's a biggie alright!

To do something like this I would need: a fast and unsinkable boat, a couple of assault rifles at hand with plenty of ammunition, and my camera. Then I would be able to shot (with the camera) the ugly beast without being too worried.

Thank goodness you got your mandatory annual alligator shot. And a darn nice one it was. Now you can remain an official Florida blogger ;>)))

Bravo Lowell, in your place I would not have done any photo...!

Wow! Your shots are great and I am glad Mr Alligator didn't object to your getting that close-up by snatching your camera or worse :).

oh how exciting! bummer they scared him back into the water!

I wouldn't worry about having cropped off his snout. He'd have done worse to you.... Brave boy, you are.

I never like it when people ruin my chances of getting some neat photos. Seems to happen all the time...but I probably do the same thing to other photographers without realizing it.

Yikes -- Lowell, you were getting quite close to that gator! Of course, chances are good I would've done the same thing to get a snout shot. Too bad those visitors scared away your subject.

What a fantastic "close encounter"! The place is gorgeous!