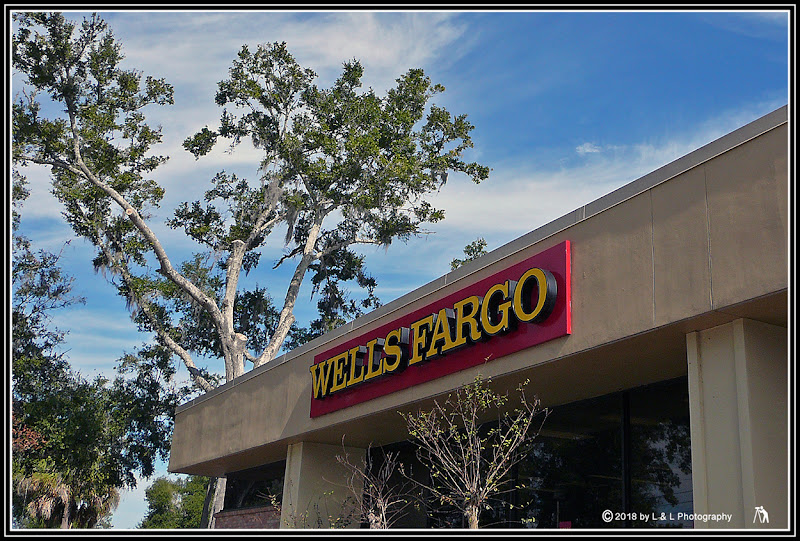 Wells Fargo, one of our country's more disreputable banking institutions, has a large presence in Ocala. This photo pictures one of the the Wells Fargo branches on Ocala's east side.

Initially, I took the photo because of the colors and the contrast between the commercial (bank) and Mother Nature (trees).  But then I realized this is a rather poignant symbol of the Christmas season.  The banks at this time of year are packed with holiday shoppers pulling money out of their accounts or applying for loans to obtain additional money with which to buy Christmas gifts with which to litter their living rooms on Christmas morning.

Scrooge, the bad guy of Christmas, has a point, I think.
Posted by Lowell at 2:15 AM

Lowell, delighted to see you back to blogging. Yes, Wells Fargo was caught with unethical business practices and it looks like some of their executives will actually serve prison time. Their stock has been on a wild ride too. Merry Christmas, Lowell.

It's true. Sometimes it seems that money is all that matters in this time of year. So glad we know better ;))

There are times I can relate to Ebenezer.

our bank is just filled with machines, only a couple of workers are there to help or answer questions. The buying season is in full swing now.
Merry Christmas!

Yep. He does. We used to bank with W-F because they bought out the bank we started with -- but because of their antics, we pulled out all our money (and not to buy stuff with which to litter our floor). (And of course, I am very sure that the loss of our account made a huge difference in their bottom line, ha ha! but it was the principle of the thing.)

I'm glad to see your post because I have been thinking about you two especially since we arrived home here the sunshine state (where at the moment it is dark and pouring down rain, but I have hopes for the future).

I used to work there and I agree. However, I was in IT and didn't do anything disreputable. At the time, I didn't think of them that way, I just though some of the people in leadership roles were rather stupid. I didn't realize how stupid until I was long gone and they started to hit the news.