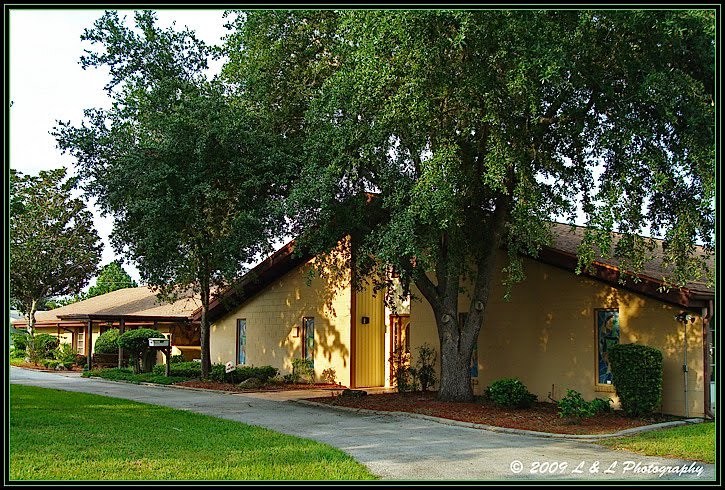 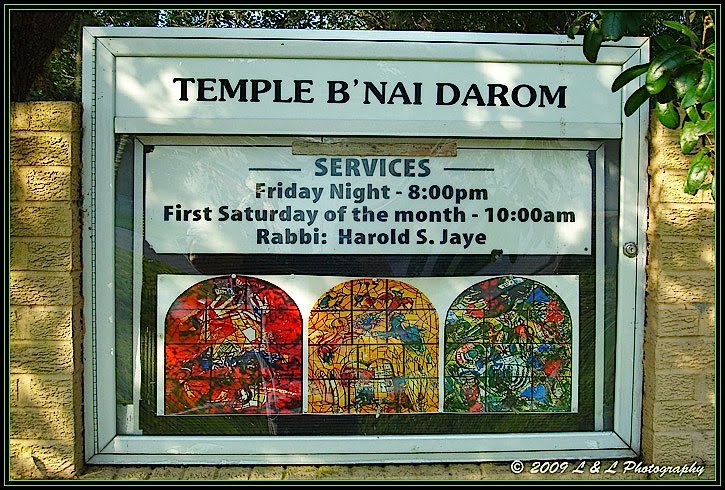 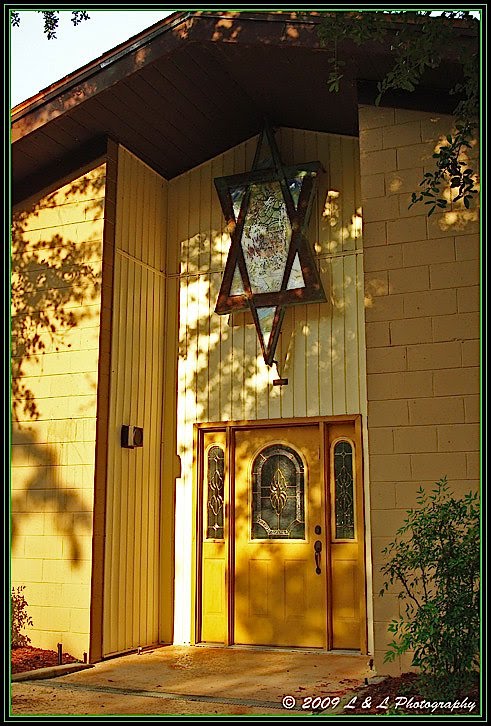 Temple B'nai Darom (which means Sons [or children] of the South) is unaffiliated but I have been told it falls somewhere between the Reformed and Conservative Jewish traditions. B'nai Darom was formed by a group who broke away from Temple Beth Shalom (a Reform synagogue) in the 1960s, although they trace their roots to Jewish settlers who came to the area over 100 years ago. There are no Orthodox or Conservative temples in the Ocala area. Rabbi Harold Jaye holds a doctor of philosophy degree from Brandeis University and has served as a professor of humanities at Central Florida Community College.
Posted by Lowell at 9:28 PM

Man, I really like the last shot. The colors, and especially the lighting. Way to go big guy!

Beautiful temple in a strange leafy location, even the name is perfect. I wonder why the sign shows three of the Chagall's Hadassah windows (Juda, Levi and Asher), any replica inside?

You know my question Jacob, if you have 200 Baptist Churches, how many synagogues do you have? The temples in our town also have a modern appearance as well. The shadows on the 3rd picture are lovely.

The sign and entrance seem very inviting to me. I really like the shadows you caught on the building. Nice photos.

superb entry, we want to visit

@ Antjas - G'morning! There are two "real" Jewish temples. Although I did hear that there's a new Reconstructionist temple being formed in the area known as On Top of the World.

We do have a couple of "messianic" synagogues, but we don't consider them Jewish.

Very nice presentation. I think this may be the first Jewish temple picture that I've seen posted anywhere. I've never been in one. I wonder what the inside looks like.
Have a great day.

@ VP - You ask as many questions as I do! A very good friend was rabbi at Temple Beth Shalom. Thus, I've not been inside here. I intend to visit sometime, however. So, at this point I can't answer your questions...if I do talk to Rabbi Jaye, I'll see what I can find out.

Our one temple in Jackson is a reform temple under the Beth Shalom. The best thing about it (I think) is that the Rabbi is a woman. People don't know much about the Jewish tradition in the south, but there were quite a few Jews in the olde days. After the war, I think most of them moved on to more prosperous places.

I should get a picture of our temple up too!

It looks so peaceful and calm. The doors in the last shot invite me in.

Been there, done that! Do you remember your torah portion?

Great shots at the right time of day, I would say. The golden light is perfect.

The building looks lovely on the 1st shot! Thanks for the information, I don't think I've ever heard of them.

I would never have guessed this was a temple. It's a lovely location, a real treat.

The evening sun appears to cooperate fully. Well directed, I'd say! Over here the sun seems to move along its own orbit without much respect for my grandiose plans.

Lovely shot of the temple. Do you send copies to the temple?

There is a new Reconstruction Temple in the process of being formed here in our neighborhood. Irene has attended several services but I doubt if she will join as a member. They seem to have nearly a hundred people interested, so far.

I will not as I have no interest as a secular humanist.

The doorway is a lovely color, very warm and inviting! Wonderful captures!

Yes, I really like the last shot, too. I love the golden light shining on the door and Star of David. I never tire of seeing places of worship. To me, each one is a symbol of freedom that I don't want to lose.

@ Nikki - Hi, Nikki! Welcome back! You've been busy commenting today! Thank you so much! Hope that all is well. I checked your blog, but you haven't posted for awhile, so I'm hoping we'll see some new shots soon.

It is great to see your name again and to have you participating in CDP!