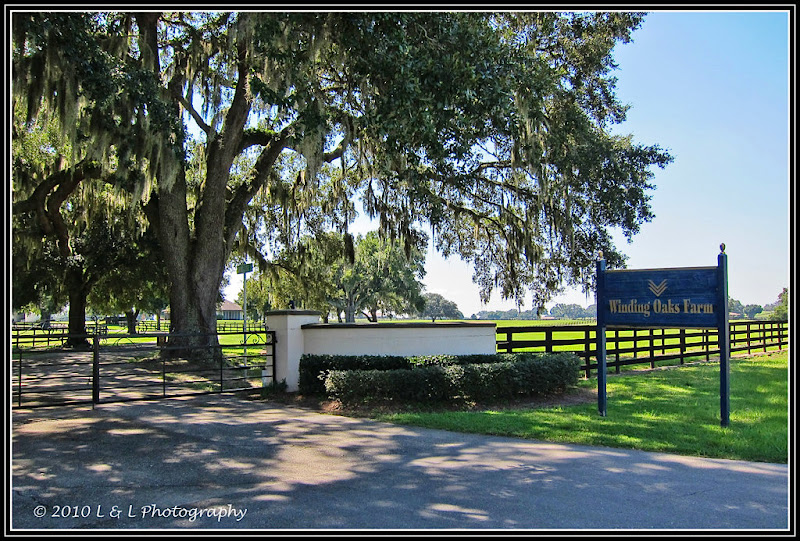 Originally, most of what's now known as the Winding Oaks Farm, was part of the Tartan Farm, owned by the 3M honcho, William McKnight, Jr. It was purchased by Eugene Melnyk in 2001, and under his leadership, the tradition of breeding top race horses continues.

Melnyk, while a native of Toronto, lives full-time in the Barbados except when he comes to Ocala on holiday, which is as often as possible. In addition to overseeing the huge operation that is Winding Oaks, Melnyk owns the Ottawa Senators of the National Hockey League and heads up a pharmaceutical company known as Biovail.

Although some 100 oak trees on the farm were destroyed in the 2004 hurricane, the 1,000 acres Winding Oaks Farm still contains many beautiful old trees amidst rolling hills. The property also contains two natural springs.

Winding Oaks serves as an oasis of calm and beauty surrounded by residential and commercial establishments. May it always be so!

Many great race horses come from Winding Oaks Farms. And one of the latest to find fame was Sealy Hill, the 2007 Canadian Horse Of The Year.
Posted by Lowell at 6:28 PM

The light and shadows in this photo are delightful, Jacob. It looks like an ideal horse farm.

Sealy Hill was from this farm? Hmmm.

I think they should give me a job! It looks like such a wonderful place to be.

What an interesting post. The photo is terrific and 'looks' like a horse farm. Too bad they lot so many trees.

Beautiful place....Bibi would LOVE to roll and run in all that grass.

It looks like a wonderful place. I bet the horses are happy. Rose and I will work there.
I just read why so many Canadian Champions are from the US but I forgot already. LOL MB

I'm enchanted by that tree, it's magnificent!
Léia

I hate to hear about all those oaks being lost, but hurricanes will do that! I am always worried about the one oak tree in my backyard. I would hate to lose it, but I would hate it even more if it fell on my house! This is such a lovely picture Jacob.

Wait...horses? Did you say horses? Now you have my undivided attention!

Is it ever open to the public? Sounds fantastic!

Bringing kids in for visits sounds like a wonderful idea. I'm sure they'll enjoy it.

Looks like we are going to be headed for Berlin a little earlier than expected this year. We've had a death in the family. :(

The photo is really great. I wonder why the oaks have been called winding.
I am sorry for Halcyon's family.