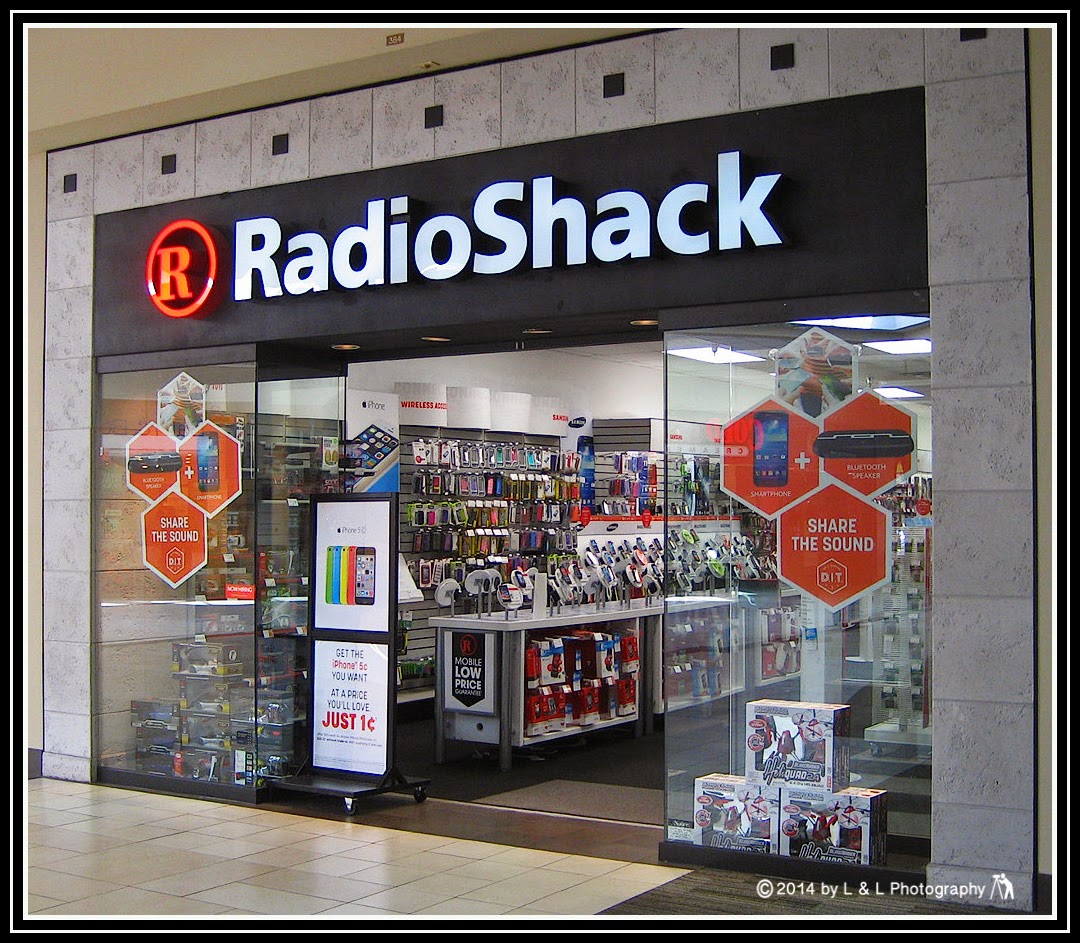 This is the Radio Shack store in our local mall.  According to the latest reports, Radio Shack is having serious problems and the company is planning to shutter about 1,000 stores in the United States.

Some folks may be saddened by this news, but most won't notice any difference.  Radio Shack has been run over by other, far superior stores, which not only offer the same goods at better prices but also sell thousands of products Radio Shack does not carry.

Hobbyists, computer techs and spooks employed by the CIA and the NSA may still rely on Radio Shack, but I'd guess most of what they need can be bought online for less than what Radio Shack charges.

From my point of view, one of the company's biggest problems is the incompetent and surly help they hire.  I stop at Radio Shack occasionally.  They usually don't carry what I need and if they do the clerks wouldn't know what it was or where to find it!  And they don't care!

Unless big changes are made, I'd guess Radio Shack will be totally out of business within five years.
Posted by Lowell at 5:00 PM

An example of not keeping up with the times and not training your employees. I haven't been in one of these stores in years.

My experience and sentiments exactly. They should take a page out of the Apple store re. p.r.

This does not surprise me. I have noticed the untrained and unfriendly help, not only at Radio Shack but in many other places. After being an office manager for many years, it is surprising to me that the help is so badly informed about how they should treat customers. I made sure that the people who took care of the customers knew that those were the people that paid the bills, including their paychecks. I guess no one explains that anymore.

Radio Shack changed its name to "The Source" up here and the last time I went there was for an unusual battery for some solar lights - they didn't have any!

So, Lowell, what do you really think? Don't hold back.

I use Radio Shack occasionally for something that I need right now of a technical type, and don't want to go online and give credit card data to a stranger and wait for it to arrive. Yup, it is a troubled chain, but if they were better managed, they could survive in a niche.

You're giving them 5 years?

I found the experience you describe at many stores in California: absent employees or ones who were clueless. I stopped asking. In rural Washington it's usually very different. Friendly, helpful people who ask what they can do to help. I'm sure the closer you get to cities it changes, but out here it's different, and very welcome.

Ah, yes, Radio Shack... I wondered why the name change to the Source up here.

Different name, different layout... same surliness. And why do they need to know my address and email and phone number?

I think we'll probably lose ours. There is never anyone in there.

bricks and mortar retailers are having a hard time competing with online shopping.

Guess they have not moved with times.. sad.

its always sad to see stores go as it means lost jobs.

Agree with you about their help. I only buy something there if I am absolutely sure of what I need, not for their recommendations.

That's sad. Before multimedia became a byword, Radio Shack was my go-to place for computer to TV cables. They didn't last long here, either.

So many stores, of all descriptions, going to the wall...

I only visited their shops a couple of times when I was in the States, but I share your impression. I hope they will be able to improve the service before the worst happens...

Looks a modern and beautiful store. I would like to explore and by something...
Léia

Nice photo of the store, Lowell, but I never heard about them...

Anyway that was some of my milestones when I went to your country. I used to buy adaptors and phone cards, etc there.

As regards incompetence, I think radio shack is not the only company to suffer that. Even in stores like CompUSA I have met some young employees who did not know anything about GPS systems or mobiles, etc...

In France even our city gardeners, the real ones, are really competent but they have to hire jobless people to reduce the rate of unemployment which has been skyrocketing for years. Many of those people have no training but also they do not like plants and trees. I have not studied botany but I like the vegetation and it hurts me to see how little consideration it gets.

Maybe it depends on where you live. Not that I shopped too often at Radio Shack, but when I did the experiences were always positive. Anyway, times change and businesses sometimes have to close. That's just how it is unfortunately.