For Mary Travers - In Memoriam 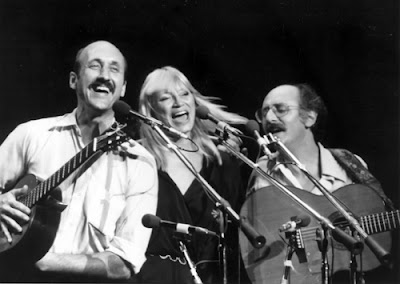 Mary Travers has died. She was 72.

Peter, Paul and Mary have always been my favorite performers. From their early years to the present, I have found joy, challenge, and solace in their music. But it was more than that. As they sang songs of protest, they didn't leave their commitment on stage, but lived it out in their work to end war, poverty and discrimination.

Musically, they are extremely skilled. Noel Paul and Peter are superb songwriters and incredibly gifted guitarists and singers. And Mary, with that throaty, sensuous sound, which cut through the air like a knife, brought a haunting vibe to every song they sang together. Who can forget how she would throw her head back, toss her hair, and let loose, challenging heaven itself as she belted out "This Land Is Your Land"?

In 1976, I became friends with Noel Paul Stookey. At the time, I was in charge of a large youth convocation which met at the Sheraton-Boston. I wanted desperately to find a singer to do a benefit concert for world hunger. Those I contacted were very gracious but could not perform due to scheduling conflicts. I also sent a note to Noel Paul Stookey, but heard nothing. Then, out of the blue, I received a letter saying he would be happy to perform a benefit concert for world hunger; that he had been overseas and had just received my note.

We kept in touch for many years, and Lois and I were often provided with free tickets to the trio's concerts, the most exciting of which was just after they reunited to go back on tour.

While I did not know Mary in a personal sense, I did say "Hello" and listened in on her conversations backstage after the concerts. She was unfailingly polite, gregarious, knowledgeable and had a great sense of humor.

We last saw Peter, Paul and Mary in concert in Coral Springs, Florida six years ago. They never failed to inspire as well as entertain. I got a chance to talk a bit with Noel Paul Stookey during an intermission where we renewed our acquaintance.

It is hard to believe that never again will Peter, Paul and Mary fill a concert hall with their incredible, unique, and most beautiful music.


You can find tributes to Mary by Peter Yarrow and Noel Paul Stookey as well as photos and much more on their website here.
Posted by Lowell at 10:01 PM

Wow, I'll try and search for their music and will litsen to experience what you've explained in your post here :-)

Jacob, I don't know exactly how close you and I are in age, but I do remember as a kid, my parents turning on numerous variety shows in the evening and there they were. At the time I didn't know anything about folk music and only a bit about protest music. All I knew was I liked what I heard, and isn't that the way it probably was for many? That beautiful sound that only those three could produce will never be heard live again. Aren't you glad for all the recordings? Thank you Mary. Rest in peace.

Oh my! I didn't hear the news. Yes Mary, Rest in Peace.
I always loved Peter, Paul and Mary. Just plain GOOD music. I saw them on TV not too long ago.
Aging well, I thought.

Oh, gosh, I hadn't heard. I love Peter, Paul, and Mary, and saw them at the Hollywood Bowl in the sixties.

This seems to be a fantastic performance !!Loved this..Unseen Rajasthan

I saw them and her (solo) many times. I, suddenly, feel very old and very sad.

Ah, a bygone era! I miss the music and the motivation behind protest songs. Peter Yarrow was on a seminar to El Salvador with a group I had joined to monitor the elections in El Salvador years ago. We have lost so much over the years, and groups such as these are far superior to the currently-popular hip-hoppers. Yes, RIP Mary!

Sorry, I didn't know her, but appreciated your beautiful tribute.

What a beautiful rememberance. I don't remember who said it, but memories are the best kind of immortality.

Thanks for a wonderful tribute. The group was absolutely huge back in the Sixties and Seventies.

I hope it's ok for me to share my encounter with her. They came to S.I.U. where I was a student. After the show, my date and I waited around to get autographs. When we got to the front of the line, we started talking to her. As you know, she's tall, maybe 5'9" or 5'10". She told us that she had a bad habit of slumping. She also said, she was doing something (I forget exactly what) in public and she started crying. One of the others (Peter or Paul, don't remember which) hissed at her "It's okay to cry, but at least stand up straight."

She stood tall for many years as far as I'm concerned.

What a wonderful story Jacob! Thanks for sharing. I will miss her too. When I was in jr. high, I took guitar lessons and I must have sung Puff the Magic Dragon about a million times!

Lovely tribute to a damn fine woman and entertainer and someone who really believed/acted on what she felt.

@ Memphis Mojo - Thanks for that most interesting story. I don't remember her every crying, but it wouldn't surprise me; she was very emotional and very sensitive. And, now that I think about it, even though she's been in a lot of pain, she's always stood tall!

I heard about her this morning! She had a full life & some great experiences... Blessed be!

Wonderful tribute to Mary. Yes, I was stunned by this very sad news.

How sad! I always loved Peter Paul and Mary, have many of their records (yes, records!) and sing their songs a lot. I was once married to a man named Peter and we had a monkey that we named Paul so we could also be Peter Paul and Mary. (Really!)

I have always enjoyed their music and as with many folks their words and performances form parts of our fondest and deepest memories of special people and events in our lives. No matter our ages, they touched us deeply and their music will play on in our hearts and minds. Leaving On A Jet Plane and Where Have All The Flowers Gone will always be two of my favorite songs.

@ Mary Stebbins Tait - How fun, and poignant at the same time!

I remember listening to Puff the Magic dragon as a child. Loved that song. Sad to hear Mary left us.

Oh, I'm sad today. I grew up on their fine music. Leaving on a Jet Plane i played on my blog when I left for France. Puff the Magic Dragon was another fav. Bless you Mary.
V

Gosh; I've been out of touch the last few days. You wrote beautifully about her and them. What wonderful people what wonerful music. I am sadened.

This is a great loss for us all as we think of how she, Peter and Paul sang those songs that marked our lives. However, your loss seems greater as you were so personally touched by the trio. Aren't we lucky to have experienced their words and music.

Thank you for this tribute. It was a great post. I had heard the news the night before I saw your post,and felt sad. That was an era that had such a profound effect upon the world and everyone in it, and Mary Travers and the guys were such a big part of that. I came of age just at the time that this music was becoming known, so it's been with me all my adult life, you think the icons will never die. At least their memories and recordings will live on. They did so much, they were so much. They were part of everything we did and felt. It was good to read your story.

It was very sad to hear of her passing. I just love them! There will never be another group like them, either.

Your post is not just a tribute of great respect; it truly reflects that you have lost a great paragon and a true hero. I'm sorry to hear this. She will live on forever through her music. May she rest in peace.

Another beautiful voice joined the chorus of angels...

Thank you for a lovely tribute and your good work for helping with the world hunger. Love to visit your blog everyday, but it's hard with dial-up (paying the price for wanting to live in a remote area)

@ Nopham - Thank you! I can't imagine trying to work with dial-up again! It's been a long time and I guess I just take the cable setup for granted.

I remember this band , nice tribute .