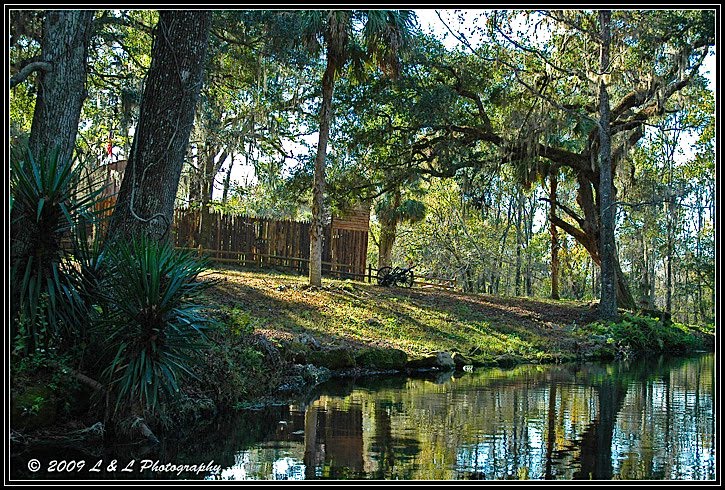 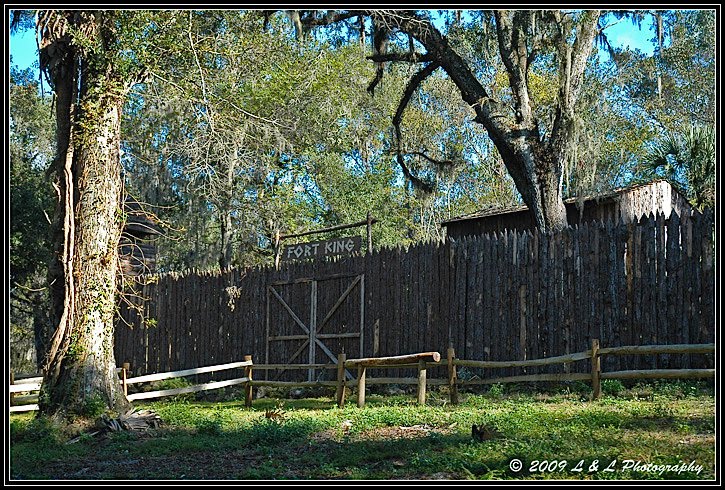 Photos 3 & 4 - A Bunny Weaver at the Fort King Festival. She is weaving material made from the hair of the bunny on her lap. 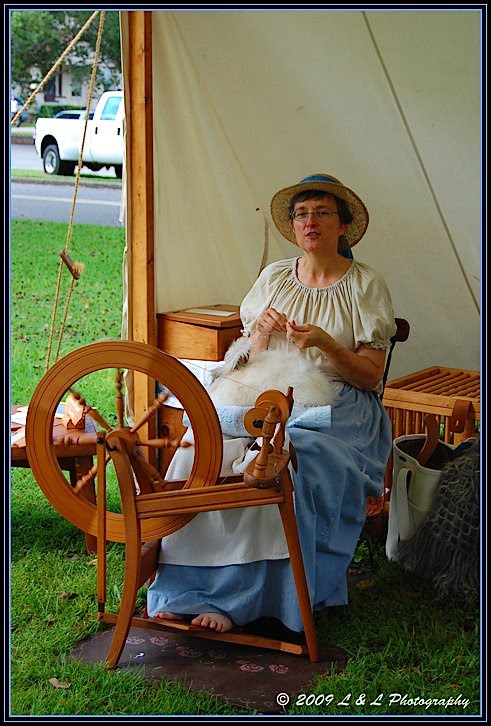 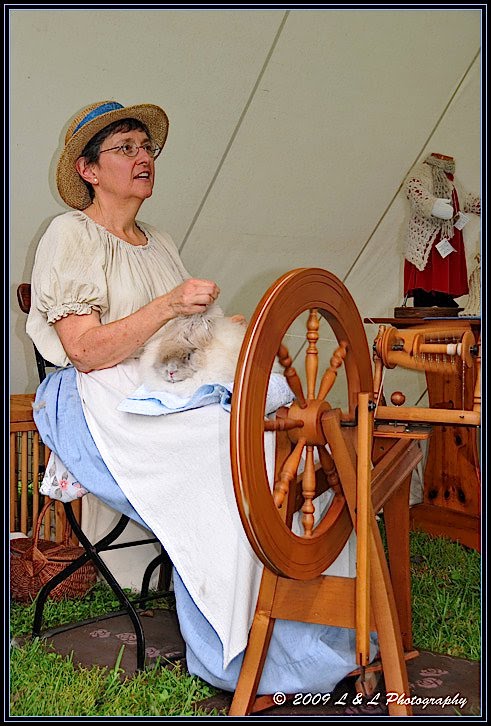 Photo 5 - A Seminole using a seashell as a horn 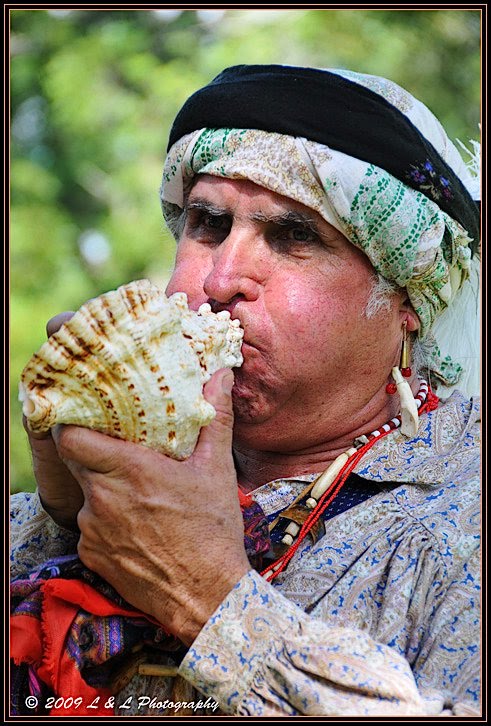 In 1827, Fort King, a U.S. Army installation named for Col. William King, was built in what is now east Ocala to try to maintain a measure of peace between white settlers moving into the area and the Seminole Indians who lived slightly to the south. After about two years, however, the fort was essentially abandoned

In 1832, the Fort revived and became involved in the relocation of Seminoles to the west, and later served as a strategic site during the Second Seminole War (1835-1842). It was burned by the Seminoles in 1836 but not decimated and remained in use until the end of the war. In 1844, Fort King became the newly-formed Marion County's first courthouse.

In the end, the fort was abandoned, torn down and it's wood used for other construction projects in the area.

The site of the original fort is about a mile from our home. It is empty land with nothing to designate it's importance other than a couple of markers.

A replica of the fort has been built at Silver Springs and can be seen on one of the boat rides.


Ocala and Marion County conduct a Fort King festival annually about two miles from the site of the fort. It is a celebration of the area's historical heritage and involves various vendors, craftsmen, soldiers, Indians, conquistadores, music and food, among other things.
Posted by Lowell at 7:23 PM

I like all the textures of plants and water and wood in the 1st 2, and the super portraits!
J. with all this photography, do you have time to sleep? :)

Some really beautiful and lovely shots !! The lady making the Cotton is having a fantastic machinery...Great..Also Jacob I would like to pass you the Unseen Rajasthan Award which is for showing us the things which are lesser known.Great..Unseen Rajasthan

Just Go to my Blog and collect the Award placed on the Right Hand side bar.Unseen Rajasthan

Beautiful set of photos, love the reconstruction of the fort and the beautiful portraits. The images of the weaver and of the Seminole are stunning.

We sure do love a festival. I guess I find it strange that we will celebrate a fort that is no longer around and wasn't the happiest of places when it was.

That poor bunny will be bare naked by the time she's done with her sweater.
Wonderful photos as usual - great greenery. I don't think that fort was easy to defend.

How unfortunate that the original fort has gone. Sad that something of heritage is removed for no good reason, but great that a replica has been constructed. The conch-blower portrait is wonderful Jacob.

These are beautiful photos of a place I would surely visit. I especially like the lady with the rabbit...imagine she's twirling its hair as she knits...

Not only all the photography, Tash, but all the thoughtful (and witty) comments left on so many other sites. I don't know how you find time to attend events like this but I'm sure glad you do, Jacob. Great shots.

I'm still to see the original fort king but I like the replica will try to search about the original too! The material made out of bunny hair looks extremely soft! The details and expressions captured in the last shot are amazing!

I would love to watch that Bunny Weaver for awhile!

I didn't know there was such a thing as a bunny weaver..how 'bout that. Interesting history on the place. Love the portraits, esp the shell blower. I'm trying to get better at portraits, but they aren't easy! Great job on these.

Fascinating ... was the bunny alive?

Thank you all! Tash & Brattcat - I'm retired, to that gives me more time than folks who are required to work every day. And every once in awhile, I sleep a little bit! :-)

Fantastic photo's and information. I would love to see that in person. The picture of the lady weaving the bunny hair is amazing. I would have to hang around awhile and watch that process. Good portraits are so hard to get and these are really good.

@ Daryl - You betcha! Kinda sleepy, but keeping a wary eye out for too-strange people...

Like the reflection in the water in the first photo, but absolutely love the one of the man blowing the seashell. Is it a conch?

@ Small Scenes - Hi Mary Beth. I think it's more of a celebration of the area's history than the fort...it's just that Fort King makes for a nice focal point...

I like the Seminole portrait and the location of the Fort (1st pic).

WOW, this looks very interesting. Great shots! Love those of the bunny weaver. They're very good!

@ Ciel - Thanks. Re: the bunnies. I have no idea! I had never heard of this before, nor had I ever seen one of these (what look to be a special breed) bunnies. I was, quite frankly, amazed at the whole process. And that bunny just sat in her lap totally content.

Sounds like there were a lot of neat things at the festival! Does she pluck the hair directly from that bun bun or wait for it to fall out?

@ Halcyon - From what I could see, she was plucking hairs from the bunny...

Outch! What would PETA think of plucking hairs from a living bunny? Sheesh! (-;
The pictures are awesome. Nice people shots.

Lovely photos and a great history. The bunny thing is a little disturbing, but he doesn't seem to mind. He was probably shedding that hair anyway!

It's good to remember the past in this way. Adults as well as children learn from these festivals. Very nice captures!