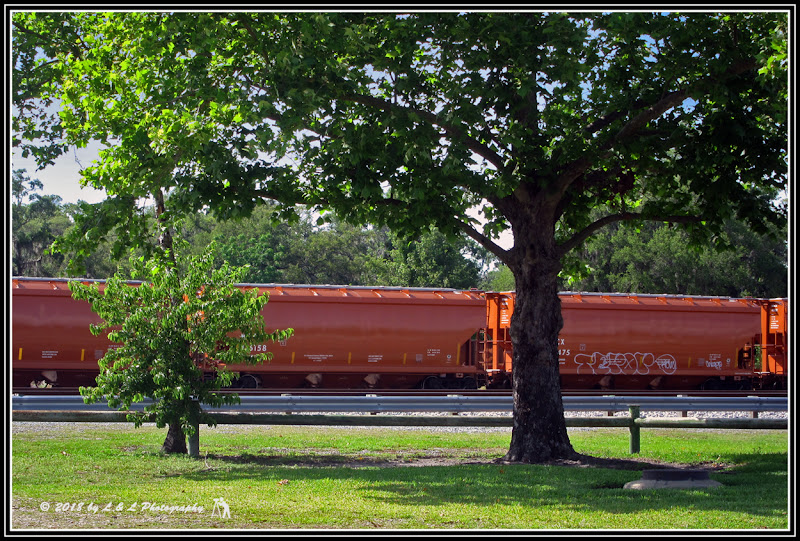 For many of my readers, especially those who live in countries other than the US, freight trains are no big deal. But we don't see many of them in the U.S. these days because President Dwight D. Eisenhower, under pressure from the formidable auto industry and its supporters in Congress, determined that the U.S. should put its money into interstate highways rather that train tracks.  Thus we chose to do down that road (a terrible mistake, in my opinion, because the U.S., through this decision, became a supporter of toxic global warming.

This train is rumbling through the small town of Wildwood about 60 miles northwest of Orlando. Notice how little graffiti there is.

I live close to a main rail line. I always say one can judge how well the economy is doing by the number of freight trains that pass through.

We see them here all of the time. Some seem to be be a mile long at least!

I so agree with you. We Americans tend to make our decisions based on big business, money and greed. I wonder if that will ever change. Every time I go to Europe, I marvel at how easy travel is. Visit a town a 100 miles away? No problem, there are at least 10 different trains headed that way every day.
That really is the cleanest freight train!

I live near a train track and see them going by. I was going to comment on how little graffiti there is.

Gosh that really was a bad decision Lowell, whenever I'm in Fremantle and see the extremely long freight trains heading up North to Kalgoorlie I always think what a brilliant way to get huge amounts of equipment and other goods up to the mining areas.

Yup. So true. Although as a frequent ‘ flyer’ on those freeways, it is hypocritical of me to say so.