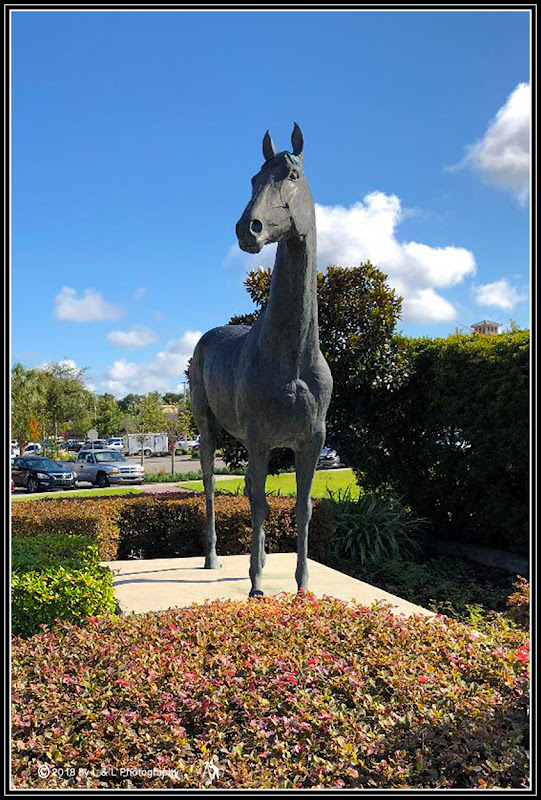 Heathbrook is a large outdoor mall in Ocala. Although built several years ago, it is just now beginning to take off and I think it will eventually be quite successful.

There is a small green area in the middle of the mall, which contains several beautiful oak trees and a statue of a horse. Some years back, I did a post on this statue. It celebrates the importance of the thoroughbred industry in the Ocala area.

The first thoroughbred farm in the Ocala area was Rosemere, which started up in 1936. But it wasn't until 20 years later when an Ocala thoroughbred by name of "Needles" won the Kentucky Derby that the thoroughbred industry came into its own. Within 10 years, the number of horse farms went from a handful to many hundreds. Today Ocala is known as the "Horse Capital of the World."

This is a statue of Needles, 1956 Kentucky Derby Champion.

Looks very elegant and proud.
You have captured it very well, Lowell !

It is a beautiful statue of a horse, capturing the loveliness of these animals. I love horses but am no longer attending horse races because of the many difficulties of the "sport." How I would love to start life all over with the privilege of owning a farm with thoroughbreds.

Good ol' Needles he sure started something
MB

You have captured Needles at the perfect angle Lowell.. a well deserved memorial I would say ✨

I always think of horses when I hear the word Kentucky. I might have to change that to Florida now and more specifically, Ocala.

And what a pretty picture. I'm reading "Seabiscuit" right now, so this is timely.

Now nice that Needles could stand still to pose for its portrait. You caught him in the best light. Enjoy your weekend, Lowell.

Love your new header, I love that place! I don't think I've ever been to this mall, I'll have to check it out. Love the horse!

I do hope I will get to travel back to Ocala, last time was in there mid 1960's.. which is interesting as I am only 29! (snorks-n-giggles)
I am looking forward to seeing Ocala all grown up.

I was thinking there might be haystacks involved... but just this wonderful photo of a fine thoroughbred.

He stands tall and proud, a wonderful tribute to a special horse.

Decades ago I had a friend who knew a couple of people working with horses in Ocala.